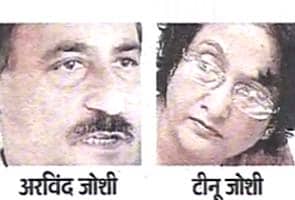 Not too shabby for bureaucrats.

Now, those investigating the extent of their corruption have found another twisted deal. Arvind Joshi violated the Foreign Exchange Management Act (FEMA) and bought 100 acres of agricultural land in Madhya Pradesh in the name of his NRI sisters without informing the Reserve Bank of India. The Enforcement Directorate (ED) issued a notice against the couple after Income Tax officials informed them about the violation.

The couple was immediately suspended after the raid in February last year and presently, no one knows about their whereabouts. They have two children and have apparently bought property in their son's name as well.

"The authorities will examine whether they declared the income with which they bought these assets. If not, they will have to pay tax on the undeclared assets, as well as pay a penalty. And a case of tax evasion may also be charged against them," said Brajesh Gupta,  the Director of Income Tax Investigations in Madhya Pradesh.

Unknown to the authorities and most likely to the Joshis, the couple was getting a run for their money from Ashok Jain. An engineer in the Public Works Department, he was able to accumulate nine kilograms of gold biscuits and assets worth another 10 crores  - the discovery was made in a raid at his home in Bhopal four days ago.

Madhya Pradesh's Hall of Shame for politicians and bureaucrats is an expansive one. 35 bureaucrats and 14 ministers are formally being investigated for corruption.

In defense, the state has recently drafted an Anti-Corruption Bill expected to be introduced in February. The bill says public servants -  serving or retired - who are  accused of corruption will be tried by a fast-track court. If found guilty, their properties will be confiscated.
Comments
arvind joshibhopal IAS coupleIAS couple raidFEMAAshok Jain