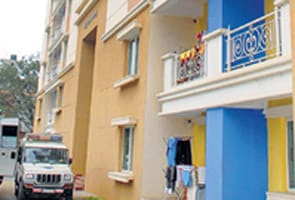 Bangalore: Was the death of Cisco employee Parijat Banerjee an accident or is there something more than what meets the eye? This is a question cops are trying to answer.

Police are conducting fast-paced investigations and questioning Vishal Keshav, the person who was with Parijat when the accident took place on January 6. According to officials, investigators raised doubts on the present theory of accidental death and were awaiting the post mortem report.

Parijat's wife Roopa has filed a 'formality' complaint and has been asking the police repeatedly to finish procedures as early as possible. Parijat had gone to his Brigade Harmony Apartment at Whitefield to sell his flat on the day he died. He had two houses in the city, and was residing at Bannerghatta Road with his wife and two children. He had plans of selling his Whitefield house and had also placed advertisements in newspapers.

On Wednesday, a prospective customer called him and requested to see the house. Parijat reached the apartment with Vishal at around 4.30 pm.

Investigating police officer Sadanand told MiD DAY, Vishal now claims he was using his laptop at the time of the accident. However on Thursday, Vishal had claimed that Parijat was in the balcony as the house was messy, while he (Vishal) was at the door.

Also Parijat (as per Vishal's statement) was on a phone call. Strangely, the police did not find any laptop at the apartment. Vishal since told the police that he was using his phone to browse the Internet. Parijat's phone too took a beating with the fall and requires the phone manufacturer to crack it open and retrieve call and SMS details

Police are also baffled over why Parijat walked to the balcony when the house had three bedrooms and a big hall. Another factor is that the 'prospective buyer' never turned up or tried to contact his wife.

Roopa has already registered a complaint in Whitefield police station saying her husband died after falling from the 7th floor. She also said that she did not suspect anybody.

Police are investigating her as well and her past life with Parijat and the family's relationship with Vishal.

Roopa has been asking the police to handover the body as early as possible and as she wanted to take it to West Bengal. Other than her complaint Roopa has gone into silence and not co-operating with the police.

Investigation police officer Sadanand told MiD DAY, "We have some doubts in this case.
Though Vishal is co-operating well with the police, he has not divulged anything other than him being on the Internet and Parijat's screaming. "We can only get the facts behind his death after the post-mortem report.  If possible we will also investigate the prospective buyer and Parijat's friends."
Comments
Bangaloretechiedeathaccidental

Baby Afreen passes away in hospital after cardiac arrest