At a time when students are turning out to protest, this Bengalurean remembers that he has been resisting the establishment for almost 80 years. 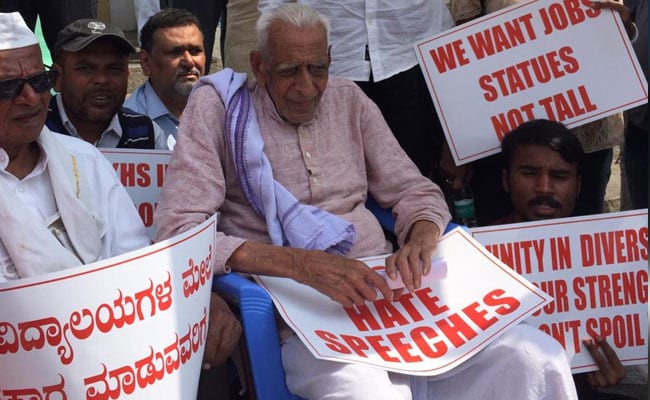 HS Doreswamy has just wrapped up a five-day protest against the contentious citizenship law. He met Karnataka Chief Minister BS Yediyurappa on Tuesday and submitted a memorandum to him. Nothing unusual about that, one might say. It is the era of protests.

But Mr Doreswamy is 102-years-old.

This freedom fighter is still at the forefront of many protests in the city of Bengaluru. And nothing seems to stop him. There was confusion over police permission at the start of his most recent protest, and this resulted in a planned tent not being allowed to be erected. As a result, Mr Doreswamy was sitting on a chair on the steps of Town Hall in the blazing sunshine when NDTV spoke to him.

At a time when students are turning out to protest, this Bengalurean remembers that he has been resisting the establishment for almost 80 years. He said, "I was 23 when I joined the movement. All the people who are below 20 are now joining the movement. And that is positive. I will be 103 in April. I am concerned about my country. I am concerned about my people. In order to do that I am prepared to lay down my life."

His political views are very clear. He told NDTV, "Main concern is (Prime Minister Narendra) Modi is now distracting our attention. He is bringing in CAA and other things. There are burning questions here in the country. Poor are becoming poorer. Rich are becoming richer. There is exploitation all over and government helps those who exploit."

"This is the sort of thing that is going on. A number of problems have cropped up and the government is not trying to find the solution to it. Therefore we have asked Modi, if you are the prime minister of the country it is your duty to attend to the problems of the people immediately. If you don't, we are saying - you better quit," he added.

Mr Doreswamy's mind is on the next general election. He said, "My message is that all the anti-Modi forces should join together. And we should have the 2024 election in mind and prepare for that election."

There have been protests across the country against the Citizenship Amendment Act that provides for citizenship for non-Muslim minorities from Muslim-majority countries like Pakistan, Bangladesh and Afghanistan if they fled religious persecution and entered India before 2015. Critics believe the law, along with the National Register of Citizens or NRC, will be used to target Muslims.