Sex with me a divine act, Swami Nithyananda told devotee 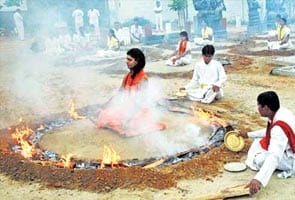 Bangalore: A new chargesheet filed by the Criminal Investigation Department (CID) has revealed more details about the controversial Swami Nithyananda.

According to the chargesheet, the swami allegedly forced a female devotee to have sex with him, claiming that he was Dakshinamurthy (Shiva), and the victim was Parvati, and they were performing a divine act.

Investigators found that Nithyananda used to take one of his devotees to his Bidadi ashram to have sex with her. When the witness objected to his advances stating that she was married, Nithyananda convinced her that he is a god and there was nothing wrong in the act. He also told her that she would attain moksha (divinity) if she cooperates with him.

The chargesheet also mentions Nithyananda's colourful life during his visit to Las Vegas in 2006. Witnesses confirmed that the swami visited strip clubs clad in jeans to conceal his identity.

He reportedly enjoyed lap dances and even forced his female followers to do the same when he returned to his room after the party. The chargesheet mentions that he not only forced the followers to  dance but also forced them to have sex with him.

The chargesheet was submitted to the Ramnagar magistrate court and the trial is expected to start soon.

In April, officials recovered a CD with visuals of the swami using wildlife products. These  included a tiger pelt, skin of a leopard, spotted deer and a wild dog.