Bengaluru Gets Dedicated Bus Lanes To Cut Down Commute Time

Commuters have seen a reduction in their travel time.

Bengaluru is known for its slow traffic - but most commuters are reluctant to give up the use of their private transport. In a bid to make taking the bus more attractive - the city is trying out a dedicated bus lane in one of the busiest areas - the Outer Ring Road.

Thousands of Bengalureans work and commute through this road - one of the most choked areas in a city notorious for its traffic.

A dedicated bus lane was introduced here some weeks ago, that has cut the time taken for the bus journey. But not everybody using the road knows about it, and an awareness event was held to highlight the change.

Tara Krishnaswamy, Co-Founder, Citizens for Bengaluru told NDTV, "Bengaluru is known worldwide not only for IT companies but also for traffic. And that too in this corridor, Outer Ring Road, about 6 to 8 lakh people go every day to work. Almost everyone takes their private vehicles as there is no train here and Metro is not functional yet. So the only public transport available is bus. All the agencies in Bangalore, the BMTC, the BBMP, the traffic police have come together to create a unique bus priority lane for almost 22 km."

"A dedicated lane where the buses get priority. Since the buses carry about half of Bengaluru's commuters, it can really speed up the way the people reach work. It will incentivise more people to take the bus. And reduction of vehicles will improve the quality of air in this city. It has been running for a month but not many people know about it and you see other vehicles entering the bus lane. We are trying to raise awareness and let people know this lane is only for buses," Krishnaswamy added. 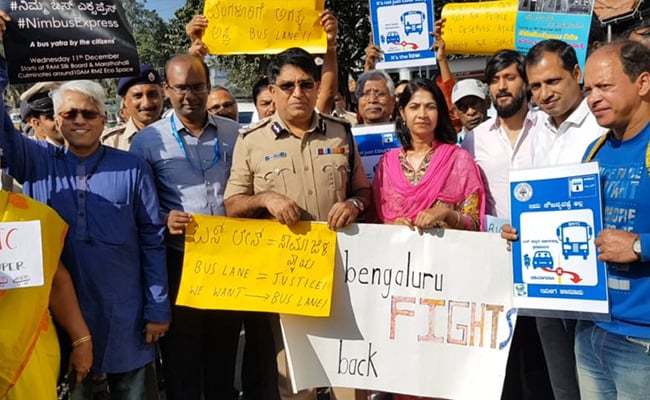 Different city agencies have come together to make the initiative a success. And top officials hopped on the bus to make their point.

C Shikha, MD, BMTC hopped on the bus and told NDTV, "The initial response has been very encouraging. Our ridership has gone up substantially. Per day we have added 12,000 passengers to this route itself. And the travel time has also reduced. Earlier we were taking 1 hour 30 minutes to travel on this route. Now it has come down by 16 minutes... The more number of people that come onto the buses, the faster the buses can go... We have identified other high density corridors. Based on the success of this project we will expand further."

"People in Bangalore are fed up of pollution and congestion. This needs lot of infrastructure- segregation, signalling, dedicated bus stations," he told NDTV. He also said that a serious issue that has been in focus of late, the safety of women, is being considered also.

"Women's safety is a major issue. All these buses have drivers who have been sensitised. Cameras have been fixed and lights are always on even if it is midnight operation unlike contract carriages. A lone woman returning late at night should be safe," he said.

Commuters have seen a reduction in their travel time.

One young woman said, "It hardly takes 20 minutes from HSR Layout to Ecospace. Earlier it used to take 45 minutes."

Another commuter told NDTV it had made a big difference. He hoped more people would start commuting by bus.

"It took 10, 15 minutes to come from Silk Board to here. A few days back it took me half an hour... I appeal to all the IT employees on this stretch to make use of the buses to commute and avoid your vehicles. That is how we can avoid pollution," he said.

A dedicated bus lane is of course not a new concept - but perhaps it is better late than never.

Kannada film actor, Chetan Kumar, told NDTV, "I think this is a wonderful campaign. We in Bengaluru are always talking about congestion and how there is so much traffic. And Citizens for Bangalore, Whitefield Rising are coming together and doing this bus priority lane... A bus carries 40 times the number of people than cars. I was actually born in Chicago and living in Bangalore. And bus lanes started in 1940 in Chicago. I am glad that 80 years later - it is about time we are bringing it to Karnataka. This is sustainable, democratic and environmentally conscious."

The use of public transport is acknowledged way to reduce congestion and clean up polluted air. The hope now is that Bengaluru's commuters are listening.