The rain on Monday night flooded homes, roads and parked cars in the low-lying areas of Bengaluru.

Vehicles are submerged on a flooded road in Koramangala in Bengaluru (Courtesy: Akshar Udupa)

Bengaluru: Dirty, foul-smelling froth was back in Bengaluru's Bellandur lake and spraying passing motorists on Tuesday after a night of heavy rain, the worst in the city in August since 1890.

The clean-up of the city's largest lake was expected to be completed by May, but the government is yet to finish clearing the weeds.

The 1000-acre lake, frothing for years, had caught fire in February, generating dense fumes that hung over the entire area for days and led to massive protests by residents. 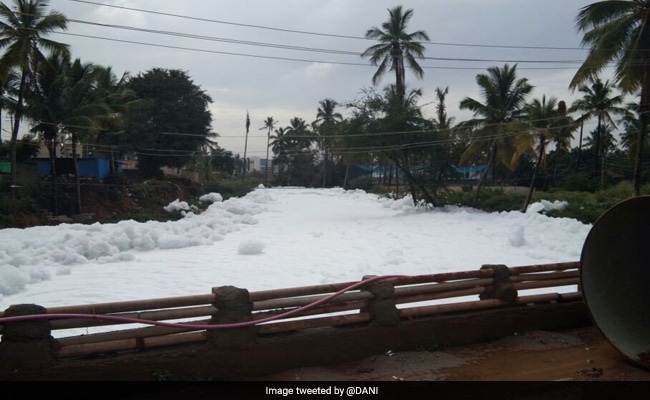 The green court stepped in, ordering the state government to clean up the lake by May 19. The state said such operations have been in progress, but given the immensity of the task, they would not be able to meet the deadline.

The rain on Monday night flooded homes, roads and parked cars in the low-lying areas of the city.

"The downpour in just three hours - 3 am to 6 am - was so heavy that storm-water drains could not take the load, resulting in water overflowing on to several roads and inundating low-lying areas," Bruhat Bengaluru Mahanagara Palika Commissioner Manjunatha Prasad told reporters.

Not just basement parking, in some cases, water entered the ground floors as well. Residents lashed out at the government for not preparing for the monsoon by cleaning out drains.

"It is not only the vehicles, our entire electrical room is under water. Our generator is submerged. We really don't know the kind of damage that happened," said David, a resident of Dollars Layout.

Over the last few years, the city's civic body has spent crores of rupees to de-silt the Koramangla-Challgatta valley, but still, areas near it were flooded. A minister claimed the government had started work on storm water drains and only a few areas were affected.

"All these years, no government has been serious about building of storm water drains. Our Chief Minister has given enough funds. We are building 200 km of storm water drain at a cost of Rs 800 crore. But the problem is, it is not easy work," said KJ George, the Bengaluru Development Minister.

Last year, unprecedented scenes of people fishing on the waterlogged streets were seen in July after rain flooded several lakes in the city.

Later, the state government had launched a demolition drive, claiming encroachment over storm water drains had led to the flooding. The drive was abruptly stopped after properties of politicians and actors were identified as encroachments.
Comments
BengaluruBellandur lake