According to reports, the residents of the Bengaluru area where the incident took place had complained to the police personnel that two men on a scooter were pulling off dangerous stunts 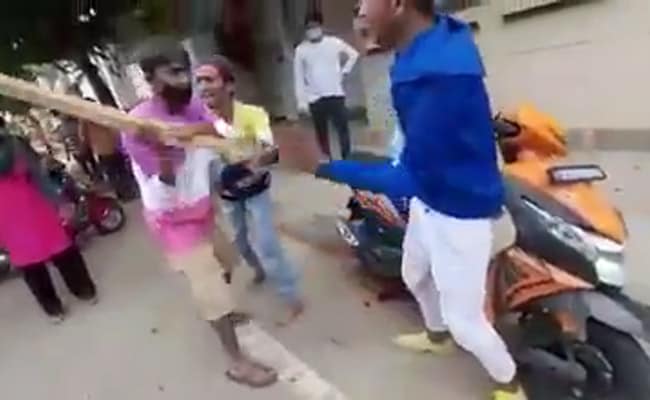 A civilian is seen beating the men with a bat.

Two men are seen being abused and kicked by a Bengaluru policeman for rash driving, in a viral video. They are also beaten with a bat by a civilian in the presence of the police, the clip shows.

According to reports, the residents of the Bengaluru area where the incident took place had complained to the police personnel that two men on a scooter were pulling off dangerous stunts, and many pedestrians had narrowly escaped injuries.

The two policemen reportedly intercepted them and warned them. But as soon as they were allowed to go, they sped up and pulled a stunt in defiance.

The assault took place after they were caught again by the police.

In the clip, a policeman is seen scolding the men. "Didn't I warn you to drive carefully?"

Whimpering in pain, the men reply in the affirmative. "Yes, you had warned".

The policeman then uses abusive words for them and kicked one of the men in his face as he cries in pain.

Suddenly a man jumps out of the crowd and assaults the men with a cricket bat as they writhe in pain. Another policeman then intervenes and scolds the vigilante.

The police have identified both the policeman and the vigilante.

"We have secured the person who had assaulted the riders with a cricket bat. The policeman who had intervened has also been identified," senior Bengaluru police officer Dr Bhemshankar Guled said.