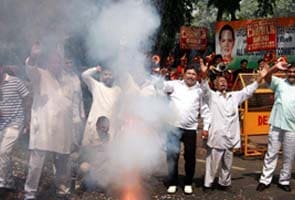 Bangalore: Karnataka has delivered an unambiguous verdict. The Congress will form the next government and will not need help. The party is leading in 120 seats, which will give it a majority in the 224-seat Assembly.  (In pics: Celebrations begin)

The Janata Dal (Secular), which is the other big gainer of the day, is neck and neck with the BJP  and may become the main Opposition party. (Read)

After five years of turbulent rule in Karnataka, the BJP is history. The JD (S) is leading in 40 seats, the BJP also in 40 and BS Yeddyurappa's KJP in 7. (Track live updates here)

Celebrations have begun at the Congress headquarters in Bangalore. And in Delhi. The party, which rules at the Centre, needs the good news, caught as it is in a series of corruption scandals perilously close to general elections, now months away. (Read: Desperate for development, Bangalore boots BJP out)

"Despite the campaign against UPA, the people of Karnataka have spoken strongly. It's a defeat of an ideology," PM Manmohan Singh said. Congress president Sonia Gandhi said she was happy with her party's win. "We expected to win. It was a joint effort," she said.

To a state that saw three BJP chief ministers in the last two years, the Congress' promise of a stable government clearly appealed. Among frontrunners for Chief Minister in the Congress are K Siddaramaiah. Two Union ministers Veerappa Moily and Mallikarjun Kharge also have their hats in the ring.

Each has rolled out the stock Congress answer since morning - "The high command will decide."

Promoted
Listen to the latest songs, only on JioSaavn.com
Mr Yeddyurappa has effectively split the BJP's vote, but has failed to convert that into gains for his newly floated Karnataka Janata Party. But he is hanging in there, offering help in government formation if his likely clutch of seats are needed. (Watch: Modi has no magic, says Congress' Siddaramaiah)

The BJP has fared poorly even in urban strongholds like Bangalore, which has voted for Congress. "This accidental fluke victory of the Congress is because of the split in BJP votes," declared the BJP's Ravi Shankar Prasad. (Read)