Assam Assembly Elections 2021: The first phase will see the entire Upper Assam region voting, as well as parts of Central Assam. Overall, 47 of 126 constituencies will vote in this phase, with the BJP-AGP combine and the Congress-led 'mahajot (grand alliance)' expected to be the major players.

The first phase sees the entire Upper Assam region voting, as well as parts of Central Assam. Overall, 47 of 126 constituencies will vote in this phase, with the BJP-AGP combine and the Congress-led 'mahajot (grand alliance)' expected to be the major players.

The BJP swept these seats in the 2016 election, winning 35 constituencies.

This election has been pitched as a battle between the BJP's '10 promises' and the Congress' '5 guarantees', with the votes of tea garden workers a possible key factor.

Chief Minister Sonowal will look to defend his Majuli seat- a reserved constituency that is one of Asia's biggest river islands - and win a second term for the BJP and himself. That last bit is uncertain, given that the party has not identified him as their chief ministerial candidate.

To win his seat Mr Sonowal is banking on how Majuli has transformed over the past five years; it is now a district, has better roads, and a bridge to the mainland has been promised.

His primary opponent will be the Congress' Rajib Lochan Pegu; the three-time former MLA and minister has accused the BJP of appropriating work done by previous Congress governments. 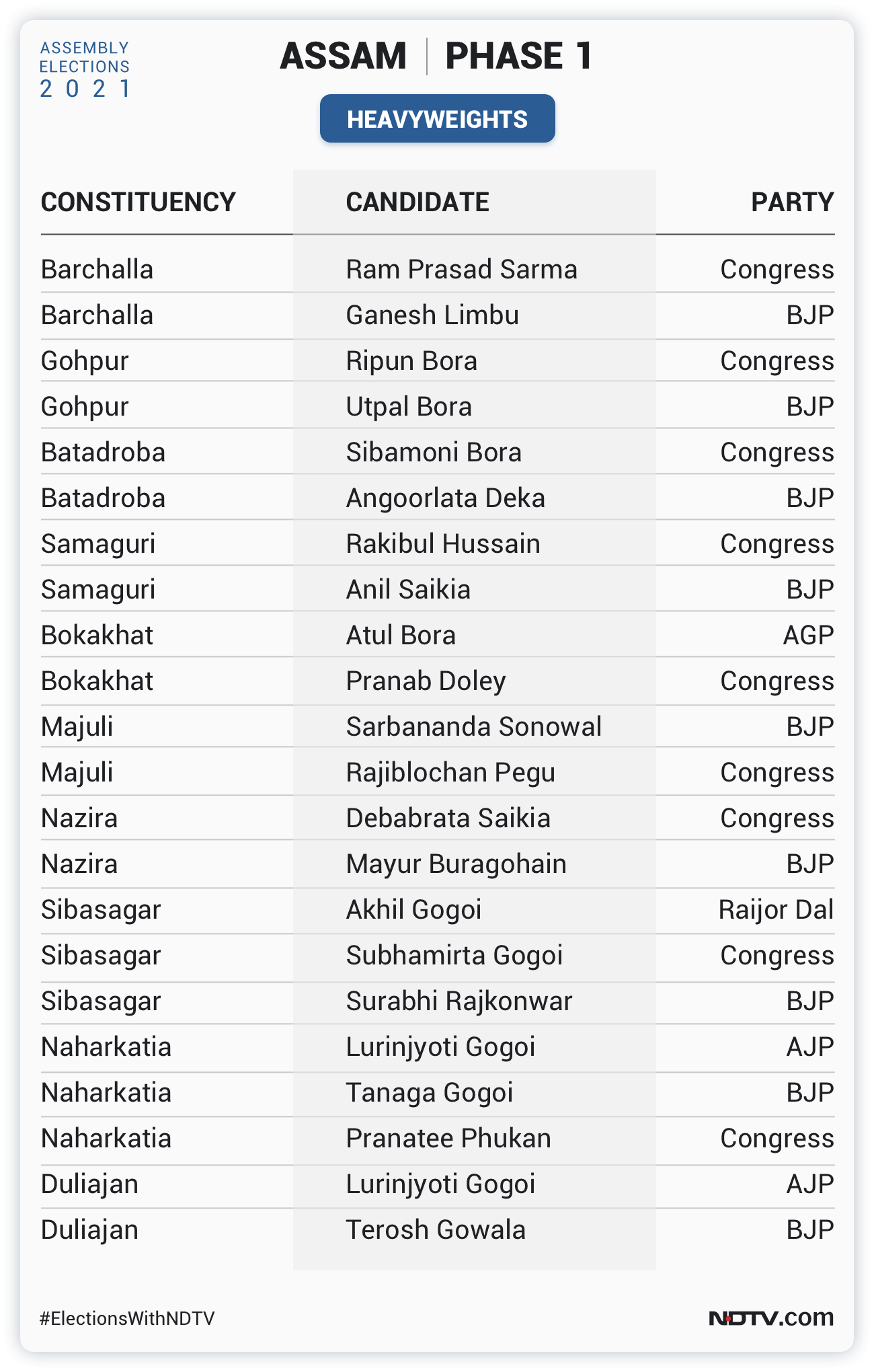 Interestingly, the Congress-led alliance has also not projected a chief ministerial candidate.

Another big name on the ballots today is activist and Raijor Dal chief Akhil Gogoi, who is contesting as an Independent from Sibsagar because the party was not registered in time.

Mr Gogoi, in jail for his alleged role in the 2019 anti-CAA protests, this week alleged torture while in custody. His 84-year-old mother, Priyada Gogoi, is among those who have campaigned for him.

Also up for grabs is Titabor - the seat held for four successive terms by former Chief Minister and Congress veteran Tarun Gogoi, who died in November last year. One of the tallest leaders in the state, his seat sees the Congress's Bhaskar Jyoti Barua and the BJP's Hemanta Kalita fight it out.

Other big names in today's election are Ranjit Dutta, Naba Kumar Doley, Jogen Mohan and Terash Gowala, all of whom are BJP leaders and ministers. They will contest from Behali, Dhakuakha, Mahmora and Duliajan, respectively, with Congress leaders their main opponents.

Assam Jatiya Parishad (AJP) chief Lurinjyoti Gogoi is contesting from two seats - Duliajan and Naharkatiya - and is pitted against the Congress in one constituency and the BJP in the other.

The fledgling outfit - formed last year by the All Assam Students' Union and the Assam Jatiyatabadi Yuva Chatra Parishad - is viewed by some as a potential surprise package.

Polling began at 7 am and finishes at 6 pm; timings have been extended by an hour to ensure Covid protocols - wearing of face masks and maintaining social distancing - are followed. Central forces will assist state authorities in maintaining law and order during voting.

Around 81 lakh people will be eligible to vote in the first phase and over 11,000 polling booths have been set up, including nearly 2,000 auxiliary stations.

The results of all three phases will be declared on May 2.