Rahul Gandhi to Undertake 'Padayatra' in Andhra Pradesh on July 24 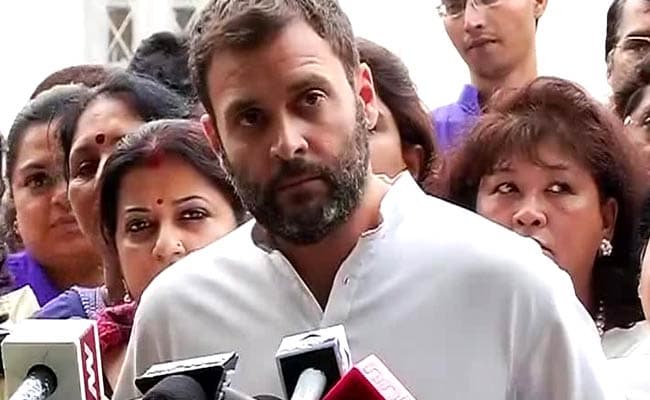 Hyderabad: Congress vice-president Rahul Gandhi would undertake a 'padayatra' and interact with farmers, weavers and women from self-help groups in Anantapur district of Andhra Pradesh during a visit on July 24.

Mr Gandhi, who has held similar visits and foot marches in states like Punjab and Telangana, would start his 'padayatra' from Obuladevara Cheruvu village in the perennially drought-hit Anantapur district on the morning of July 24, stated a release from Andhra Pradesh Congress today.

En route, he will interact with farmers, weavers and students, besides garlanding the statues of Bharat Ratna BR Ambedkar and late Chief Minister YS Rajasekhara Reddy, it said.

He would continue his 'padayatra' in two more stretches and hold meetings with NREGS workers and migrant labour at different villages in the district.

He is scheduled to meet the family of a farmer Harinath Reddy who allegedly committed suicide.

After the 'padayatra' ends, Mr Gandhi would receive representations from people and also talk to senior Congress leaders at Puttaparti, the spiritual town of late Satya Sai Baba.

The Congress vice-president would visit the 'Maha Samadhi' of Satya Sai Baba at Puttaparti, before wrapping up his visit, the release added.

Mr Gandhi undertook a 'padayatra' in Telangana in May this year during which he hit out at the NDA government at the Centre and TRS government in Telangana on farmers' and land issues.

Anantapur district, bordering Karnataka, is among the districts in the country which receive lowest amount of rainfall.