Andhra Pradesh Chief Minister Chandrababu Naidu takes a dip in the river Godavari on the occasion of 'Maha Pushkaralu'.

Hyderabad: A huge Hindu religious festival - one of the largest for South India - had begun just two hours before 29 people, 26 of them women, were choked to death in a stampede on the banks of the River Godavari in Andhra Pradesh.

A day later, many are blaming VIPs for the disaster. They point out Chief Minister Chandrababu Naidu, who opened the Maha Pushkaralu festival with a dip in the river, stayed on for 90 minutes to participate in a puja. Safety guidelines recommend that VIP visits should be as short as possible, and not deviate from plans, so that arrangements and attention can focus on the lakhs of devotees. Mr Naidu was not urged by officials to leave quickly.

The Chief Minister and his entourage visited a public ghat, rather than another ghat nearby reserved for VIPs.

Crowd management experts say almost every 10 minutes, the crowd swelled by some 10,000 people. By the time Mr Naidu and his ministers left, the crowd was hot, impatient, and oversized.

The police failed to divert people to dozens of other ghats within 15 kilometres. Nor were they arrangements like barricades to allow only batches of people through instead of an uncontrollable scrum.

The government had professed before the festival began that 1,600 crores had been spent to ensure a smooth experience. Most of the 18,000 police men were not from the area, didn't know it well enough to steer pilgrims, and had not been given maps; safety drills had not been rehearsed; emergency medical care was missing. 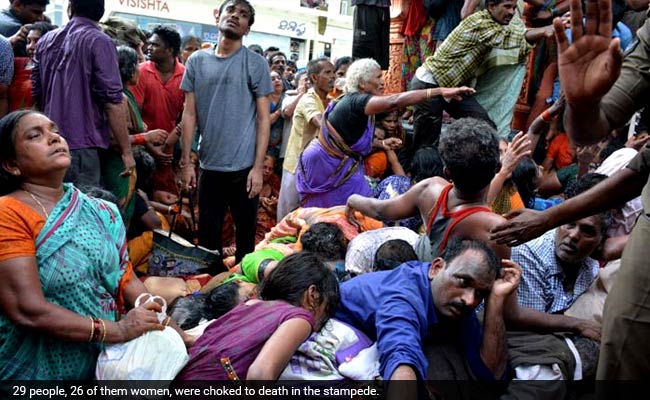