A municipal commissioner beat up people at an Anna Canteen in Andhra Pradesh.

A municipal official in Andhra Pradesh lost his cool today at a crowd that was mobbing the counters of a government subsidised canteen and beat up several people.

At lunchtime at a newly-opened 'Anna Canteen' in Kurnool district's Yemmiganur, the people lining up for food triggered an almost stampede-like situation.

Struggling to get people to form an orderly queue, Municipal Commissioner Raghurami Reddy resorted to slapping and shoving them out, a video of the incident shows.

The Andhra Pradesh government on Wednesday launched the much-awaited Anna Canteens in various parts of the state. 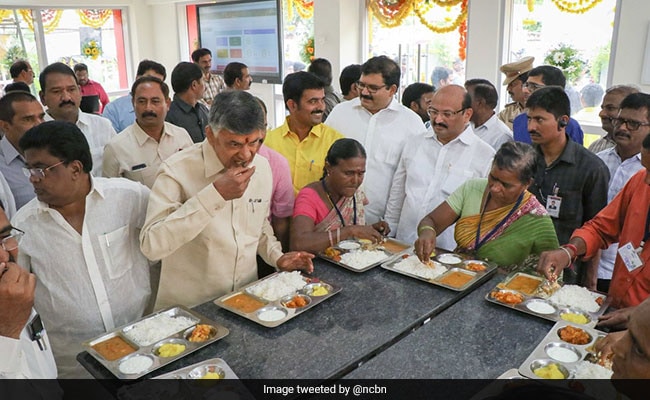 Sixty Anna Canteens were opened as part of the first phase.

Chief Minister N Chandrababu Naidu inaugurated a canteen in Vijayawada to mark the launch of the programme. Sixty Anna Canteens were opened in the first phase across the state.

The Akshaya Patra Foundation will run these canteens.

Setting up Anna Canteens, where breakfast, lunch and dinner would be offered at Rs 5 each, was one of the promises the Telugu Desam Party (TDP) made ahead of the 2014 polls.

Mr Naidu said he expected the canteens to function like international fast food chains. "You can benchmark these canteens internationally. KFC or McDonald's. Quality, environment, cleanliness, hygiene... you name anything, nowhere you will have such perfection," he had said.

Friday's incident, however, shows the canteens will have to work some more in the customer service department.