Sabarmati Would Flow As Clean River After Monsoon: Vijay Rupani

The ''Swachh Sabarmati Maha Abhiyan'' (Sabarmati river clean-up campaign) was launched by Chief Minister Vijay Rupani from the banks of the river near historic Sabarmati ashhram. 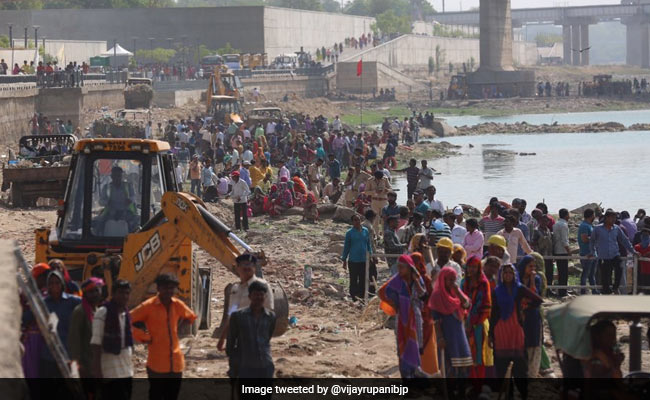 The Sabarmati river clean-up campaign will continue till June 9.

A drive to clean the polluted Sabarmati river was launched in Ahmedabad in Gujarat Wednesday to mark the World Environment Day.

Sabarmati is counted among the most polluted rivers in the country, under the Central Pollution Control Board's (CPCB's) National Water Quality Programme.

The ''Swachh Sabarmati Maha Abhiyan'' (Sabarmati river clean-up campaign) was launched by Chief Minister Vijay Rupani from the banks of the river near historic Sabarmati ashhram.

The drive will continue till June 9. Mahatma Gandhi had set up this Ashram on the banks of the Sabarmati river after his return from South Africa in 1915.

On Wednesday, thousands of citizens took part in the drive to clean a stretch between Dufnala and Vasna barrage in Ahmedabad.

Mr Rupani also participated in cleaning a part of the riverbed, which has almost dried up across the riverfront.

"On the World Environment Day, we have launched the Sabarmati clean-up campaign. Sabarmati is a historic river, and such a drive is being undertaken for the first time in many years. Due to the initiative of the Ahmedabad Municipal Corporation, people have come out in thousands to take part in the cleanliness drive," the chief minister told reporters.

He said the river bed will be cleared of pollutants during the drive. "Sabarmati would flow as a clean river after monsoon," the chief minister said.

He also appealed to citizens to voluntarily take part in the campaign.

Ahmedbad Municipal Commissioner Vijay Nehra, who is the brain behind the drive, is elated. "No words to explain what's happening today in Ahmedabad. The city has come together to clean Sabarmati river. Such huge turnout that there is no space for ppl in the riverbed!!" he tweeted.