Some of the hundreds of tonnes of lead in the spire and the roof of the Notre Dame melted in the extreme heat from the spectacular blaze. 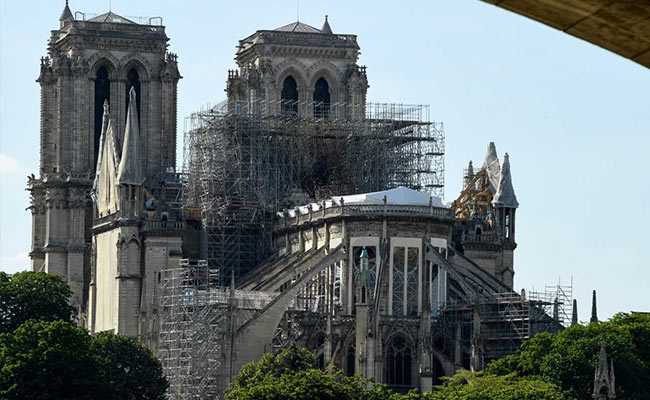 The Paris health authorities have urged children and pregnant women living around Notre-Dame cathedral to have the levels of lead in their blood checked amid concerns over the impact of the fire.

The appeal comes after a child living on the Ile de la Cite island in central Paris where Notre-Dame stands was found to have high levels of lead in a blood test.

Some of the hundreds of tonnes of lead in the spire and the roof melted in the extreme heat from the spectacular blaze.

An investigation has been launched to check if the causes of the child's high lead levels could be other than the April 15 fire, the Paris regional health authority said in a statement late Monday.

The child showed a level above the regulatory limit level of 50 microgrammes per litre of blood.

The authority said that "as a precaution" it was asking families with children aged under seven and pregnant women living on the Ile de la Cite to "consult their GP so they can be prescribed a blood test for lead levels".

Authorities acknowledge that the Notre-Dame fire caused lead to seep into the air and ground around the cathedral.

They say there is no general risk to the public but certain areas have been closed off while people with apartments close to the cathedral are being given specific advice on how to clean up.

Paris remains shaken by the consequences of the damage to one of the city's best known and loved edifices.

The architect in charge of the restoration on Tuesday insisted that an identical spire should be rebuilt, after President Emmanuel Macron mooted an "inventive" reconstruction.

"I think we don't just have to rebuild a spire, we have to rebuild it in an identical way," Philippe Villeneuve, a senior French architect specialised in charge of restoration at Notre-Dame, told the Le Figaro daily.

The government has announced an architectural competition for the spire with options to have a new one built, an identical restoration or no spire at all.

But Villeneuve said: "The great thing about the masterpiece of Viollet-le-Duc is that it is timeless. It integrates into a medieval masterpiece of the 13th century.

"This is what we have to create again."

A YouGov survey published at the end of April showed that 54 percent of French people questioned wanted the spire to be rebuilt in an identical way while just 25 percent were keen on a more modern solution.

The issue has been one of acute political controversy in France, which is increasingly torn between respecting historical tradition and projecting a more modern, innovative image.

Supporters of a contemporary touch for the new steeple point to the fact that the glass pyramid designed by I.M. Pei outside the Louvre museum in Paris was despised by many when opened in 1989 but is now an attraction in itself.

France's upper house the Senate, when it debated and passed a bill on the reconstruction of Notre-Dame last month, added in the text that the restoration, including that of the spire, should be faithful to the "last visual state that was known".

(Except for the headline, this story has not been edited by NDTV staff and is published from a syndicated feed.)
Comments
Notre DameNotre Dame Fire