"You Must Be Stupid": Rodrigo Duterte Says Won't Be Tried By International Court

Rodrigo Duterte, 74, has previously said he was so committed to his war on drugs that he was prepared to be tried for crimes against humanity at the International Criminal Court (ICC) in The Hague, or rot in jail there. 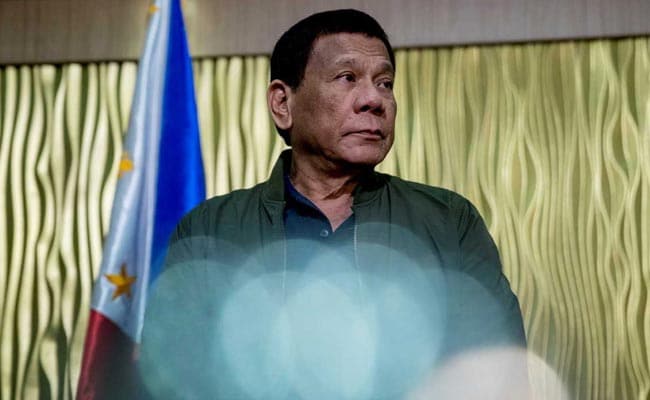 Rodrigo Duterte said he was making gains in his anti-narcotics campaign, with fewer drugs on the streets.

Philippine President Rodrigo Duterte has declared he will never be tried by an international court for mass killings in his war on drugs, and vowed no let-up in a crackdown that he said he was winning and would see through "to the very end".

In a television interview with a celebrity pastor, the firebrand leader said the Philippine justice system was working fine, so it would be "stupid" to imagine he would let an international court put him on trial.

"I will only face, be tried or face a trial, in a Philippine court. Presided by a Filipino judge. Prosecuted by a Filipino ... I will not answer a Caucasian, asking questions, white man there. You must be stupid," he said late on Tuesday.

"I am a Filipino. We have our courts here... Shit. You have to bring me somewhere else? I would not like that. I have my country. It's working. I know it's working. Justice is working here."

His opponents argue otherwise and say police are killing with impunity, and that with an approval rating of about 80 per cent, a super-majority in Congress and presidential appointees heading courts, commissions and investigative bodies, there is little chance of Duterte being impeached or prosecuted at home.

Duterte, 74, has previously said he was so committed to his war on drugs that he was prepared to be tried for crimes against humanity at the International Criminal Court (ICC) in The Hague, or rot in jail there.

However, within weeks of an ICC prosecutor announcing in February 2018 that a preliminary examination was being conducted into the killings, Duterte ordered police not to cooperate, and then unilaterally cancelled the Philippines' ICC membership. The ICC examination continues, despite his withdrawal.

His latest show of defiance comes days after the UN Human Rights Council approved a resolution to hold an investigation into the killings, responding to a call from 11 UN experts concerned about a "staggering" amount of deaths.

The Philippine government has rejected the resolution as meddling by biased Western states and denies activists' allegations that police are executing thousands of drug users and peddlers.

Duterte said he was making gains in his anti-narcotics campaign, with fewer drugs on the streets.

He said suspects should choose to "drop the drugs or drop dead", but suggested that was merely an expression, not an instruction to kill.

"Whether they like it or not, I will continue what I started to the very end," he said.