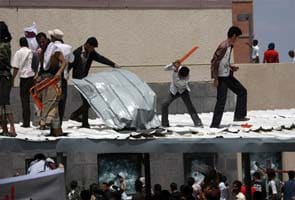 Sana: Yemeni police on Thursday shot dead a protester in renewed confrontations outside the US embassy in Sanaa, shortly after ejecting crowds that stormed the mission's compound, a security official said.

The official said five other protesters were injured when demonstrators, angry over a film insulting Islam, tried to storm the compound again.

All protesters who breached the fence of the US mission in Sanaa have been ejected, the correspondent reported, as security forces used water cannon and fired warning shots.

Police also fired warning shots earlier to disperse thousands of protesters as they approached the main gate of the mission.

The attack comes two days after four Americans including the ambassador were killed when a Libyan mob attacked the US consulate in Benghazi, and protesters in Cairo tore down the Stars and Stripes and replaced it with a black Islamic flag.

Promoted
Listen to the latest songs, only on JioSaavn.com
The low-budget movie "Innocence of Muslims," in which actors have strong American accents, portrays Muslims as immoral and gratuitously violent.

It pokes fun at the Prophet Mohammed and touches on themes of paedophilia and homosexuality, while showing him sleeping with women, talking about killing children and referring to a donkey as "the first Muslim animal."
Comments
protester outside US embassy