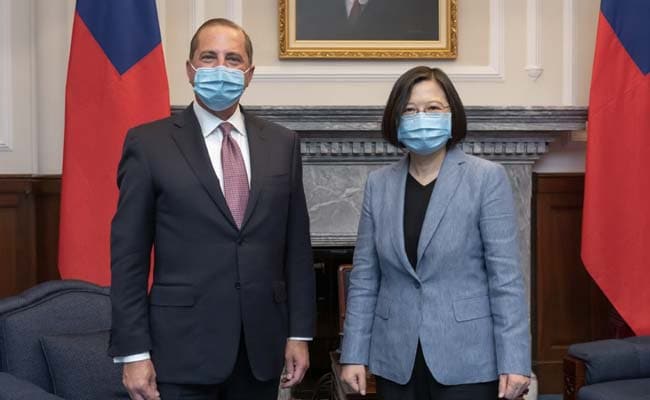 Taiwan's opposition party demanded a clarification Monday after a US envoy who is visiting appeared to mispronounce the name of the island's president for her arch rival in China.

In his opening statement he fluffed the name of President Tsai -- pronounced "ts-eye" -- and instead said something closer to "shee".

That sounded uncomfortably close to the pronunciation of Xi Jinping, the president of China, a country that views Taiwan as its own territory and has vowed to one day seize it.

But the opposition Kuomintang party (KMT), which favours warmer ties with China, jumped on the gaffe.

"The KMT expresses shock and disapproval while urging the presidential office to sternly protest to the US side and clarify that the president of the Republic of China is surnamed Tsai, not Xi," the party said in a statement.

"There is no doubt Secretary Azar was addressing (her) as President Tsai," he said in a statement.

"We suggest all sides to focus on (Taiwan's) diplomatic accomplishments and anti-pandemic cooperation. Closer Taiwan-US relations is the joint fruit of the efforts made by all people."

Social media reactions were mixed, with some netizens saying Azar's pronunciation sounded like "President Xi", others musing it might have been the word "presidency".

Its transcript of Azar's speech contained the phonetic spelling of Tsai's name as "ts-eye".