It is designed to fly at altitudes of 6,100 meters for up to five days when manned. 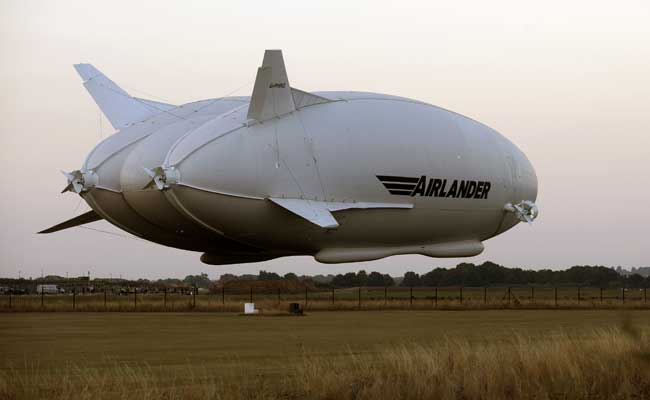 With a length of 92 metres, it is the largest aircraft currently flying (AFP Photo)

London: The world's largest aircraft has successfully completed a test flight, bringing the massive helium-filled airship one step closer to commercial use.

The hybrid aircraft dubbed the Airlander 10 combines technology from airplanes, helicopters and airships.

It is designed to fly at altitudes of 6,100 meters for up to five days when manned.

With a length of 92 metres, it is the largest aircraft currently flying, 'Live Science' reported.

On May 10, the Airlander 10 flew for a total of 180 minutes to test the aircraft's handling, improved landing technology and more, according to Hybrid Air Vehicles, the British company that built the aircraft.

The flight test team was "very pleased" with its initial analysis of the Airlander 10, the company said.

"There will also be passenger variants for the ultimate flying experience and eventually Hybrid Air Vehicles will fulfil a crucial role in point-to-point cargo transportation to remote areas," company officials said.

This was only the third flight of the Airlander 10. It first successfully flew in 2012 as part of the US Army's Long Endurance Multi-intelligence Vehicle programme.

Promoted
Listen to the latest songs, only on JioSaavn.com
The modified Airlander 10 made its maiden voyage in August last year, kicking off a flight test programme to assess the aircraft's performance and attempting to fly the airship farther away from its base in the UK.