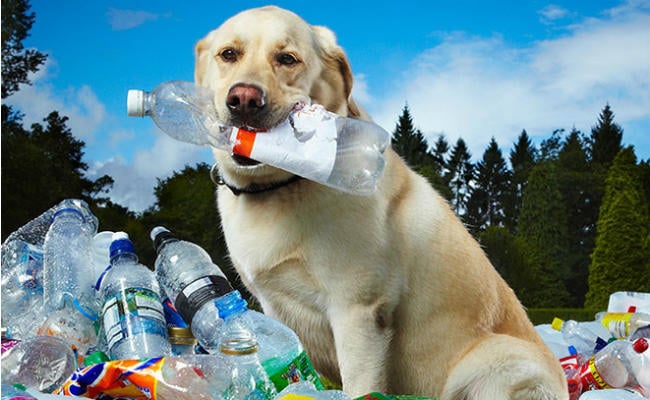 Tubby, won the title of 'world's greenest dog' by Guinness Book of Records in 2011 after picking up 26,000 plastic bottles on his twice daily walks and crushing them in his mouth. (Photo Courtesy: Guinness World Records)

London: Tubby, said to be the world's greenest dog after entering into the Guinness Book of Records for sniffing out 26,000 plastic bottles for recycling has died aged 13.

Tubby, a Labrador from Torfaen, UK died yesterday. The dog, won the title of 'world's greenest dog' by Guinness Book of Records in 2011 after picking up 26,000 plastic bottles on his twice daily walks and crushing them in his mouth.

He would carry them over to his owner Sandra Gilmore, to be recycled, BBC reported.

"It was a pleasure to have Tubby feature in the book. It was a unique record and we are honoured to have been able to verify his achievement in the community," a spokesman of Guinness World Records said.

Ms Gilmore believes Tubby collected more than 50,000 discarded bottles in his life time as he was more obsessed by them than the usual dog playthings like a ball or stick.

"He meant so much to us and the local community and he had friends all over the world. He didn't let it all go to his head though as he was always the keenest, greenest recycling canine around with the smallest carbon paw print ever," Ms Gilmore added.

"He was a remarkable dog and did a great job sniffing out rubbish to recycle, and helping to improve the environment for everyone in Torfaen," Torfaen council's waste and recycling manager Cynon Edwards said.

Tubby's efforts won him fame, including being invited onto the BBC One Show also being presented with a bone live on ITV.

Israel Bans Travel To India, Six Other Countries Amid Rise In Covid Cases