World On Edge Of "Delicate Precipice": Pope Francis In Bahrain

The 85-year-old Argentine decried the "opposing blocs" of East and West, a veiled reference to the standoff over Russia's invasion of Ukraine. 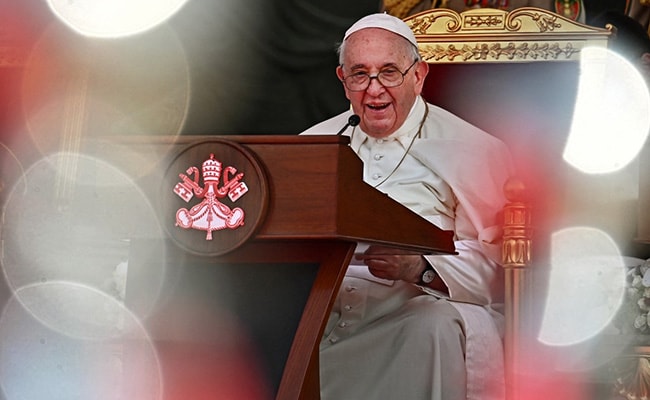 The Pope said it was vital that "fundamental human rights are not violated but promoted".

Pope Francis warned Friday the world is on the edge of a "delicate precipice" buffeted by "winds of war", during a trip aimed at bridging the gap between faiths.

The 85-year-old Argentine decried the "opposing blocs" of East and West, a veiled reference to the standoff over Russia's invasion of Ukraine. His comments came during a speech to religious leaders at the Bahrain Forum for Dialogue in the tiny Gulf state.

"We continue to find ourselves on the brink of a delicate precipice and we do not want to fall," he told an audience including Bahrain's king and Sheikh Ahmed al-Tayeb, the grand imam of Cairo's prestigious Al-Azhar mosque, a centre of Sunni learning.

Francis was to later meet with Tayeb.

"A few potentates are caught up in a resolute struggle for partisan interests, reviving obsolete rhetoric, redesigning spheres of influence and opposing blocs," he added.

"We appear to be witnessing a dramatic and childlike scenario: in the garden of humanity, instead of cultivating our surroundings, we are playing instead with fire, missiles and bombs."

The pope's visit comes with the Ukraine war in its ninth month, and as tensions grow on the Korean peninsula and in the Taiwan Strait.

Ahead of the pope's speech, Vatican Secretary of State Cardinal Pietro Parolin, who met Russia's Foreign Minister Sergei Lavrov in September, told journalists that there had been "a few small signs" of progress in negotiations with Moscow.

"All peace initiatives are good. What's important is that we carry them out together and that they're not exploited for other goals," he said.

The pope, who is using a wheelchair and a walking stick due to chronic knee problems, was to later meet members of the Muslim Council of Elders.

The pontiff's second visit to the Gulf, birthplace of Islam, comes three years after he signed a Muslim-Christian manifesto for peace in the United Arab Emirates.

Leader of the world's 1.3 billion Catholics, Francis has placed inter-faith dialogue at the heart of his papacy, visiting other Muslim-majority countries including Egypt, Turkey and Iraq.

He began his first visit to Bahrain on Thursday by hitting out at the death penalty and urging respect for human rights and better conditions for workers.

Rights groups had previously urged the pontiff to speak out about alleged abuses and step in to help death-row prisoners in the Sunni-led monarchy, which is home to a significant Shiite population.

In the opening speech of his visit, at the Sakhir Royal Palace, he said it was vital that "fundamental human rights are not violated but promoted".

"I think in the first place of the right to life, of the need to guarantee that right always, including for those being punished, whose lives should not be taken," he said.

Bahrain has executed six people since 2017, when it carried out its first execution in seven years. Some of the condemned were convicted following a 2011 uprising put down with military support from neighbouring Saudi Arabia.

A government spokesman rejected allegations of rights violations, saying Bahrain "does not tolerate discrimination" or prosecute anyone for their religious or political beliefs.

Speaking less than three weeks from the World Cup in neighbouring Qatar, which has faced fierce scrutiny over its treatment of migrant labourers, the pope also demanded "safe and dignified" working conditions for all.

"Much labour is in fact dehumanising," he said. "This does not only entail a grave risk of social instability, but constitutes a threat to human dignity."

Video: Karnataka Man Shot At By Cops. He Was Threatening Locals With Knife