"...No Better Place Than US": Trump Lauds His Economic Initiatives In Davos

Donald Trump, marking his second meeting of global political and business leaders at the World Economic Forum (WEF), also told a packed auditorium that trade deals struck this month with China and Mexico represented a model for the 21st Century. 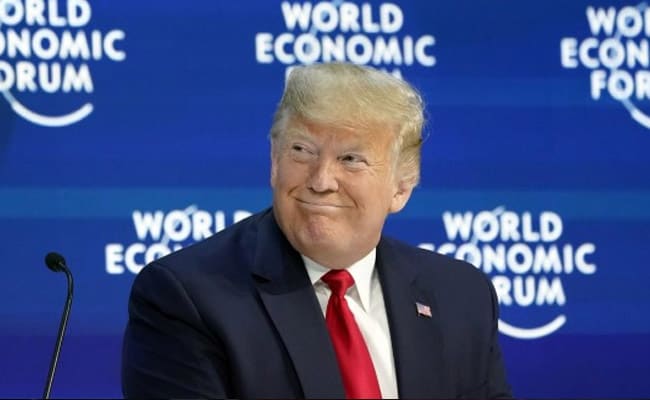 Thousands of miles from his Washington impeachment trial, President Donald Trump took centre stage at Davos to tout the success of the US economy, while criticising the US Federal Reserve on Tuesday.

Trump, marking his second meeting of global political and business leaders at the World Economic Forum (WEF), also told a packed auditorium that trade deals struck this month with China and Mexico represented a model for the 21st Century.

"The Fed raised rates too quickly and has lowered them too slowly," Trump said of the Federal Reserve, taking aim at the central bank's policy decisions.

In a wide-ranging address pitched to appeal to the Davos crowd, touting the achievements of his administration despite his unorthodox approach, Trump picked up on some of the themes he voiced when he first addressed the WEF two years ago.

He thanked overseas companies for investing in the United States and said the U.S. was on far better economic standing than he had imagined when he took office three years ago.

"The time for scepticism is over," Trump said as he invited more foreign money.

"To every business looking for a place to succeed...there is no better place than the U.S.," he added.

At a conference in which the main theme is the environment, and in which climate activist Greta Thunberg is a star guest, Trump spoke about the economic importance of oil and gas.

Thunberg was in the audience throughout Trump's speech. As she walked out, flanked by security and chased by cameras, she did not speak to reporters, but looked down.

Trump said the U.S. would join the one trillion tree initiative being launched at the WEF annual meeting, but called activists "the heirs of yesterday's foolish fortune tellers".

Nobel economist Joseph Stiglitz said the strongest thing about Trump's speech was that it was scheduled between sessions on climate change. He criticized the President's swipe at climate 'pessimists'.

"As if what we are seeing with our eyes are not there," Stiglitz said. "It's astounding."

In Washington, the impeachment trial begins in earnest in the U.S. Senate after the Republican president was formally charged by the Democratic-controlled House of Representatives in December with "high crimes and misdemeanors".

Trump, who is expected to be acquitted by the Republican-controlled Senate, says he is innocent of the charges.