World Cup Fan Pays $200 For a Poncho in Drenched Natal 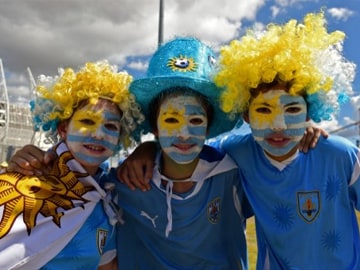 Natal: A Brazilian at the rain-drenched World Cup match between Mexico and Cameroon sold his $14 poncho to a foreign fan for $200, he said on Saturday.

Jose Humberto Martins told news website G1 he had bought the rain poncho an hour before the match outside the stadium in the northeastern city of Natal.

He was walking with his girlfriend in the stadium when a woman approached them and offered in Spanish to buy his protective plastic hood for $200.

"I thought it was a joke and kept walking. But then I thought about it and went back and asked if she was serious. She came with the money in her hand," said Martins, 28, a business manager in Natal.

"I don't know where she was from, but she was with a man who was wearing a Mexico jersey."

Torrential rain and a strike by bus drivers, the city's only means of public transportation, made life difficult for fans attending Friday's match, which Mexico won 1-0.

The downpour flooded streets in what FIFA had advertised as "Sun City" in its promotional materials. Natal has 300 days of sunshine a year on average.

Promoted
Listen to the latest songs, only on JioSaavn.com
Mexico fans dressed in green jerseys, large sombreros and colorful Mexican wrestling masks were forced to seek shelter under bridges, in doorways or at bus stops as they made their way to the stadium.

But the downpour only intensified and thousands of people were soaked by the time they got to the match. And many were still exposed to the rain at Natal's Dunas Arena, whose roof does not cover all the stands.
Comments
BrazilWorld CupFIFA