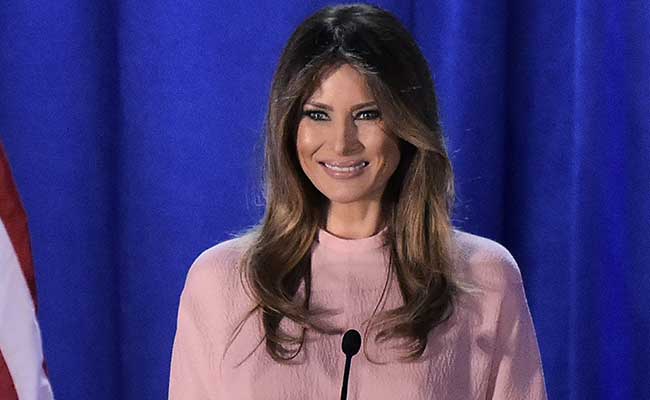 Melania said as first lady, she would fight online bullying and press for the advancement of US women.

Berwyn, Pa.: Melania Trump promised to work against cyberbullying and for a more civil society as first lady in a speech here Thursday, saying "our culture has gotten too mean and too rough" - sounding nothing at all like her husband, whose history of insults and name-calling is a central part of his candidacy for president.

"As adults, many of us are able to handle mean words, even lies," she said in a speech aimed at winning over more female voters. "They hurt when they are made fun of or made to feel less in looks or intelligence. We have to find a better way to talk to each other, to disagree with each other, to respect each other."

As she called for civility, even some supporters listening to her rare public speech in this suburban battleground were critical of the crude language her husband has used, including calling women "Miss Piggy" and "dogs."

"I am a woman, and of course it bothers me," said Victoria Granero, 60, who still plans to vote for Trump. Noting that the Republican presidential nominee is trailing badly with female voters and that his wife offered a refreshingly different approach - her words carefully considered and her talk focusing on children and kindness - Granero was puzzled about only now getting to hear from Melania Trump.

"Why didn't he send her out earlier?" said Granero, a travel consultant. "I don't think she can help him now. It's too little, too late."

Other women found it particularly ironic that Melania Trump would champion ending bullying on the Internet if her husband wins the White House next Tuesday.

Nancy Lorback, a Democratic activist, laughed when she heard about it.

"What about the tone and voice he uses? He tells people to 'sit down,' 'shut up.' He tries to intimidate people. He says about a woman, 'She is Miss Piggy,' 'She is not a 10,' " said Lorback, 70, who is working on local voter turnout.

The race is considered close here in Chester County, where in 2012, GOP nominee Mitt Romney eked out a win by less than half a percentage point.

While the campaign carefully chose the location for Melania Trump's first speech since the Republican National Convention in July, her message was aimed far beyond the hundreds of people who gathered at an indoor suburban soccer complex.

Her message - that she has seen up close how dedicated her husband is, that she loves being a full-time mom - was aimed at a crucial voting bloc of women that Trump needs to defeat Democratic nominee Hillary Clinton. While polls show Trump winning over men, he is trailing Clinton badly among women, who vote in greater numbers.

The tone of the Melania Trump's event was nothing like her husband's often-rowdy rallies. She did not lead the crowd in chants of "Lock her up!" in reference to Clinton, and she did not excoriate the news media. Before she took the stage, however, some in the crowd had nasty things to say and screamed "Drain the Swamp!" in reference to Washington, D.C.

"Every time my husband learned of a factory closing, in Ohio or North Carolina or here in Pennsylvania, I saw him get very upset," she said, naming several of the most fiercely contested states.

"Love you!" some women yelled out to her.

Melania Trump - who would be the first foreign-born first lady in nearly 200 years - has been a reluctant surrogate for her husband, perhaps in part because English is not her first language.

She won over the Republican crowd here when she spoke of growing up in the former Yugoslavia as a youth who knew of this "incredible place called America. America was the word for freedom and opportunity. ... America meant if you could dream it, you could become it."

"She did a great job," said Molly Coleman, 22, a college student. "She talked about being an advocate for American women." Coleman added that she particularly liked that Trump talked about those living in poverty.

Carol Krus, 56, a nurse, said many of her female friends are voting for Trump, too, and she wondered whether the gender gap is really is as big as polls indicate. Sure women don't like the vulgar language from him that the world heard on the "Access Hollywood" tape, a recording in which he also said he could force himself on women because he was a "star," but most women have heard it all before, Krus said.

"I was a cheerleader in high school and heard worst talk," she said.

Granero, wearing a "Hillary for Prison" T-shirt, stood listening to Melania Trump on a carpet of green artifical turf in a sports center where suburban soccer teams play. Women were asked to take off their high heels so they wouldn't tear the turf, and they happily obliged, many holding pink "Women for Trump" signs.

Some of the women who turned out to hear her said Melania Trump has helped neutralize allegations that have hurt her husband with female voters.

A dozen women have accused Trump of inappropriately groping or kissing them, but Melania Trump has said she believes her husband when he says the women are lying. She made no mention of the allegations Thursday.

Melania Trump is 24 years younger than her 70-year-old husband, who has been married three times. She left school in her native Slovenia at 19 to pursue a career in modeling, which she talked about Thursday as being "a business of glamour, but it is also hard work. There are ups and downs, high highs and ridicule and rejection, too."

"He has a beautiful family," Granero said of Donald Trump as she left the soccer stadium, happy that for a day the volume of the campaign had been turned down.