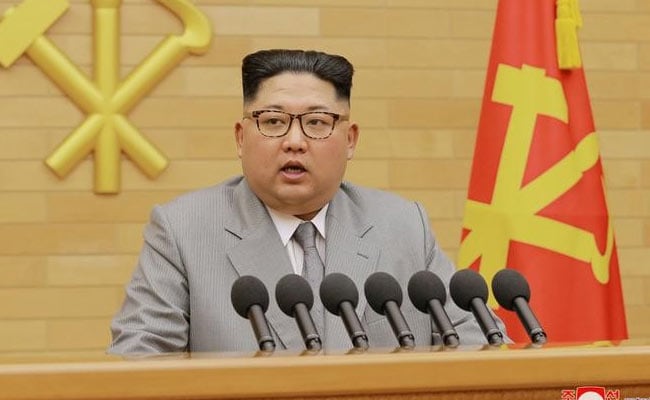 Washington: North Korean leader Kim Jong Un may not really have a nuclear button on his desk, but he has found a way to undermine the unity of his two principal foes: South Korea and the U.S.

While President Donald Trump has been wary of negotiations unless Kim first abandons his nuclear ambitions -- at one point telling Secretary of State Rex Tillerson not to waste his time with talks -- Moon won election on a platform of engagement. The same week Trump ridiculed Kim's arsenal, Moon's government suggested a Jan. 9 meeting in the border village of Panmunjom and accepted a call from North Korea over a hotline between the nations.

"Here you have the United States all but threatening war with North Korea and simultaneously you have South Korea leaning forward in an aggressive fashion to accommodate North participation and dialogue," said Evans Revere, a former U.S. diplomat in South Korea. "These things are happening simultaneously, and it is in direct contradiction to the fundamental thrust of U.S. policy."

Trump Touts 'Bigger' Nuclear Button in Retort to Kim Jong Un Kim's offer, which follows repeated requests for dialogue from South Korea, adds to tensions that have lingered between Trump and Moon since the U.S. president's inauguration almost a year ago. While the two Asian nations will ostensibly limit discussions to the prospect of North Korea taking part in the Winter Olympics in South Korea next month, both sides have raised the possibility of more open-ended talks, an idea the U.S. sought to discredit.

The U.S. is "very skeptical of Kim Jong Un's sincerity in sitting down and having talks," State Department spokeswoman Heather Nauert said Tuesday. That stance contradicted Moon's spokesman, Park Soo-hyun, who said the South is willing to have talks no matter the time, place or format.

The differing interpretations of Kim's comments highlight the gap that the North Korean leader managed to exploit. While the South Korean government latched on to the opportunity Kim's speech offered, U.S. officials had a different interpretation.

A National Security Council official, who asked not to be identified discussing White House policy, said that anyone reassured by Kim's New Year's message must have been drinking "too much champagne."

The official pointed to sections of Kim's speech calling for ramped-up production of nuclear warheads and ballistic missiles, the deployment of a nuclear counterattack posture and reunification of the Korean Peninsula. Not all those themes are new for Pyongyang, but the regime's improving weaponry suggests it seeks reunification by dividing South Korea from the U.S. and then promoting unity with its southern neighbor through nuclear blackmail, according to the official.

"I'm worried about what the South Koreans are doing," said Elliot Abrams, a senior fellow at the Council on Foreign Relations, in an interview Wednesday on Bloomberg Television. "I think they're falling into a North Korean trap. If you keep moving in the direction as the South Korean president may wish to do, then ultimately you run the risk of undermining the U.S.-South Korea military relationship."

That relationship go off to a rocky start: Moon took power last May promising a softer approach to Pyongyang after almost a decade of conservative rule in South Korea. On the campaign trail he raised questions about a U.S. missile shield, pushed for dialogue with Kim and sought to mend ties with China, North Korea's main ally and benefactor.

Meanwhile, Trump openly questioned the U.S. free trade deal with South Korea and said the Asian nation should pay more for its military alliance with the U.S. -- including the newly installed missile shield.

Publicly, U.S. officials have downplayed the possibility of a rift, and the dispute over the trade deal has been put on the back burner.

"Kim Jong Un may be trying to drive a wedge of some sort between the two nations -- between our nation and the Republic of Korea," Nauert said. "I can assure you that that will not happen. That will not occur."

Tensions between the U.S. and South Korea are nothing new: Ties between former Presidents George W. Bush and Kim Dae-jung were famously strained after Bush publicly rebuffed him in 2001 by calling him "this man" at a press conference.

South Korea's dependence on the U.S. for a nuclear deterrent probably limits Moon's options in talks with North Korea. While Kim might seek an easing of sanctions and the cancellation of joint military drills, analysts said easier measures would include humanitarian assistance and reuniting separated families.

Even so, Moon is intent on finding a peaceful resolution, and South Koreans have more directly at stake in any conflict. Seoul's 10 million people are within easy firing range of North Korea's artillery, and would suffer the brunt of the first retaliatory blows in any conflict.

Kim's nuclear advances have prompted some U.S. officials to signal that they might have to risk collateral damage in Seoul to protect the American homeland from a threatened nuclear attack. Moon has fought to dispel that notion, even claiming last year that he had the right to veto any U.S. military action against North Korea.

The subject of next week's proposed talks is symbolic of the outreach Moon has long sought. The South Korean leader has repeatedly tried to persuade North Korea to participate in the Winter Olympics next month to ease tensions. He has also requested a delay in joint military exercises with the U.S. until after the games in order to lower tensions -- something the Trump administration has yet to acquiesce to.

Moon's challenge will be delivering results with North Korea while making a sacrifice the U.S. is willing to accept, said Katherine Moon, a senior fellow at the Brookings Institution and a professor of Asian Studies at Wellesley College in Massachusetts.

Promoted
Listen to the latest songs, only on JioSaavn.com
"North Korea wants many things including economic access, so the price tag to negotiate with North Korea on anything is much higher than it ever was because of its nuclear capability now," she said. "People should not assume that because these overtures have been made that it's going to be follow the yellow brick road, a little bit of fun and that's that. It's going to come with a high cost."