With Drumstick In Hand, Congressman Mocks "Chicken" US Attorney General Absent During Hearing

Congressman Steve Cohen says: "the chicken (William) Barr should have shown up today and answered questions." 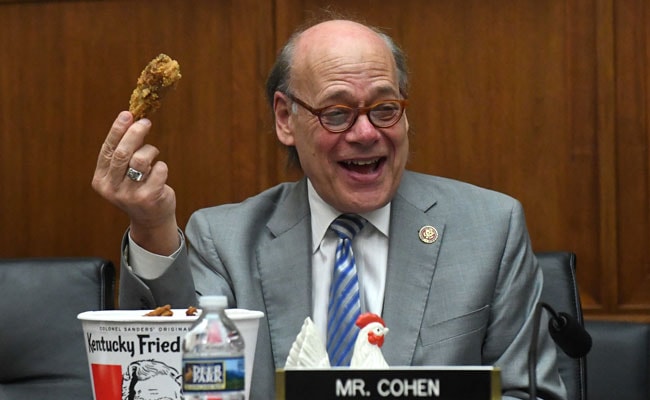 When Attorney General William Barr refused to appear at a hearing in the US Congress on Thursday, one Democrat decided it was thigh time to act against what he saw as fowl behavior.

Congressman Steve Cohen arrived at a hearing of the House of Representatives Judiciary Committee carrying a bucket of fried chicken and a poultry figurine. He said the props represented the nation's top law enforcement official, who canceled his planned testimony amid a dispute over the hearing format.

"The chicken Barr should have shown up today and answered questions," the Tennessee Democrat told reporters, after he handed out pieces of fried chicken to other committee members. After the hearing concluded, committee staffers wiped up chicken grease from the area around Cohen's seat.

Democrats accuse Barr and other administration officials of stonewalling their investigations into Trump's taxes, his businesses and other topics.

Judiciary Committee Chairman Jerrold Nadler said on Thursday that he may hold Barr in contempt of Congress if the attorney general does not turn over an unredacted copy of Special Counsel Robert Mueller's report on Russian interference in the 2016 presidential election.

(Except for the headline, this story has not been edited by NDTV staff and is published from a syndicated feed.)
Comments
Attorney General William BarrSteve CohenChicken

Sally Strengthens To Hurricane, Threatens US Gulf Coast As "Rainmaker"