Beijing has on several occasions used the threat of diminished access to its vast domestic market as a stick to beat Australia and has suspended imports of some products including beef and timber. 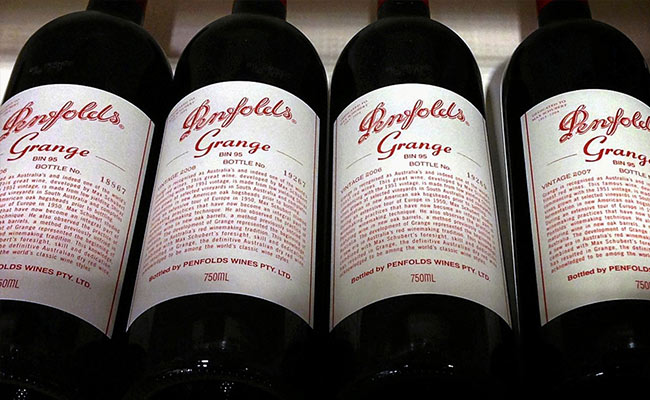 Bottles of Penfolds Grange, made by Australian winemaker and owned by Australia's Treasury Wine Estates

China on Friday said it would impose anti-dumping tariffs on Australian wine, the latest salvo in an increasingly terse standoff between the two that has worsened since Canberra called for an inquiry into the origins of Covid-19.

Beijing has on several occasions used the threat of diminished access to its vast domestic market as a stick to beat Australia and has suspended imports of some products including beef and timber.

In the latest blow, China's commerce ministry announced wine importers will be forced to pay deposits of 107-212 percent of the value of their goods at customs, saying the move was in response to "substantive harm caused to the relevant domestic wine industry".

But Australia's trade minister Simon Birmingham on Friday blasted the punitive measure as "grossly unfair, unwarranted, unjustified", and called the dumping accusation "erroneous in fact and in substance".

At a news conference, Birmingham said there was a "perception" that China was engaging in a "deliberate strategy, piling on pressure in a number of different sectors".

Canberra would continue to raise with the World Trade Organization "our concerns about the number and cumulative effect of China's trade sanctions against Australia", he said.

Zhao instead blamed Canberra for strained ties with Beijing, saying "Australia should do some deep introspection" and "reflect on whether they have respected China's interests".

China's ministry of commerce said in August it would probe dumping -- when a country sells goods in a country for less than it costs at home -- throughout 2019, at the request of the Wine Industry Association of China.

Wine exports to China hit a record A$1.3 billion (US$900 million) last year, according to Australian government data, making it the biggest market by value for Australia.

China's commerce ministry has complained Australian wines benefit from government subsidies that give them an advantage over Chinese products.

Relations between the two have deteriorated this year and Beijing has produced a laundry list of complaints about Australian policies -- from banning Huawei's participation in 5G to its call for an investigation into the origins of the coronavirus.

A Chinese official gave a dossier to Australian media containing 14 grievances earlier this month, reportedly telling the outlets: "If you make China the enemy, China will be the enemy."

In May, China suspended imports of beef from four Australian slaughterhouses and imposed 80 percent tariffs on barley shipments from the country.

Beijing has also warned people not to visit Australia for study or tourism, alleging anti-Asian racism in the wake of the pandemic.

And the two sides are locked in an ongoing row over spying, with China accusing Australia of raiding the homes of Chinese journalists as Canberra investigates an alleged covert influence campaign by Beijing.

China frequently uses its economic muscle in diplomatic disputes and Australia is not the only country to face its wrath in the form of trade restrictions in recent years.