Why Are The Rohingya Fleeing Myanmar?

Scorched earth. Harrowing escapes. Half a million on the move. 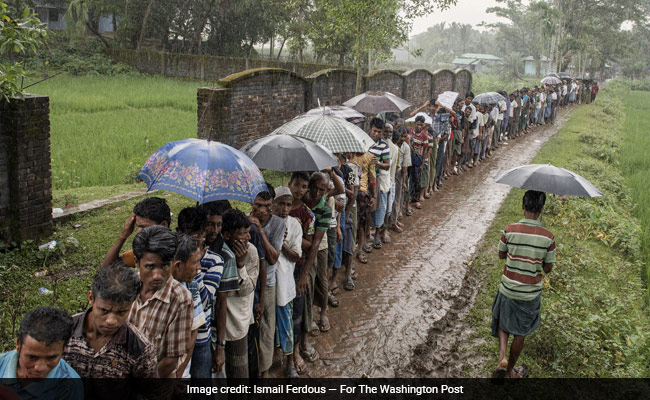 This is what he meant: Using a pretext of rooting out Islamist insurgents, Myanmar's military, together with Buddhist villagers, is terrorizing the Rohingya, emptying and razing their villages, and attempting to hound them out of the country.

Of a total of 1.1 million Rohingya that remained in Myanmar despite repeated waves of violence since the late 1970s, more than 400,000 have fled to neighboring Bangladesh in just the past month. New arrivals are building makeshift settlements near established camps where hundreds of thousands of Rohingya refugees from previous exoduses already live. Most are women, children and the elderly.

Conditions are dire. Food is scarce. Aid agencies are worn thin. The monsoon rain is torrential.

The human catastrophe has captured the world's attention. But it has also caused a lot of confusion. Didn't Myanmar, also known as Burma, just undergo a democratic transition? Isn't it led by Nobel Peace Prize-winner Aung San Suu Kyi? Why are Buddhists perpetrating an ethnic cleansing against Muslims?

How did we get here?

The coast of what is now Myanmar's Rakhine state was the center of what was once called the Kingdom of Arakan. The name Arakan has since been morphed into Rakhine and Rohingya over the years to describe both the indigenous and Muslim populations of the region.

Muslims lived in Arakan both as traders and as slaves captured by the king's army from nearby Bengal. Over time, they developed a unique language that is not mutually intelligible with Bengali. Rakhine Buddhist and Muslim populations had been interacting for centuries by the time the Bamar, a larger ethnic group from the inland, took control of the coast in 1785.

Within 40 years, the British had usurped the Bamar and ruled the Arakan coast as part of a vast colony stretching from there to the Hindu Kush. Muslims from Bengal began to move to the Arakan coast in even greater numbers during this period, in search of work in the colonial economy, in many cases supplanting Arakanese labor and stirring local resentment. The perception of the Rohingya as outsiders and illegal immigrants grew during this period and was only exacerbated when the British armed local Muslims during World War II to fight the Arakanese, who largely sided with the Japanese.

After past spasms of violence, many Rohingya would return and resettle. This time around, the Myanmar government has warned that only Rohingya with verifiable ties to Myanmar will be allowed back. The systematic disenfranchisement of the Rohingya makes it unlikely most will meet that criteria.

The Rohingya are intensely unpopular in Myanmar. The state's official stance is that the Rohingya ethnic group doesn't exist. Instead, they are referred to as "Bengali," a rhetorical linkage to a foreign land that many have never stepped foot in, despite sharing cultural similarities. Myanmar doesn't recognize the Rohingya as citizens, rendering them stateless and limiting their access to public services.

Rohingya refugees from Myanmar walk toward Teknaf mainland in Bangladesh.

Last week, the Myanmar military's commander in chief, Aung Hlaing, wrote this in a Facebook post: "They have demanded recognition as Rohingya, which has never been an ethnic group in Myanmar. Bengali issue is a national cause and we need to be united in establishing the truth."

(Hlaing has visited Japan, Germany, Austria, Belgium, Italy, India and Thailand in recent years. In Germany this summer, he was received with full military honors.)

The state has found further justification for an anti-Rohingya campaign in recent attacks on police and army posts by the Arakan Rohingya Salvation Army, a ragtag militia with ties to Saudi and Pakistani money that claims to be the Rohingya's defenders. Analysts say there may be as few as 1,500 fighters in their ranks. Arsa, as the group is known, declared a unilateral ceasefire this September to little effect. The government and military categorically rejected negotiating with "terrorists."

Suu Kyi canceled her trip to the U.N. General Assembly and is instead set to address Myanmar nation Tuesday. But, ultimately, how much power does Suu Kyi have?

When Myanmar's military junta agreed to democratic concessions starting in 2011, the world lauded Suu Kyi for her years of dedication to the cause. President Barack Obama and Secretary of State Hillary Clinton visited Myanmar and embraced her. The United States and others lifted most sanctions. Suu Kyi won resoundingly in free elections.

But Myanmar's constitution remains written in a way that bars Suu Kyi from becoming president, because she has a foreign-born spouse and children. That clause was written by the junta with her in mind. Thus she is called Myanmar's de facto leader, assuming the role of "state counselor."

In many important ways, the military still controls the country. A quarter of seats in the parliament are reserved for the military, as are the ministries of Home Affairs, Foreign Affairs and Defense. The military holds a majority of seats on the National Defense and Security Council, which has the power to dissolve the government.

That means the military could step in and replace Suu Kyi if they felt she was interfering with their plans. Whether they would risk renewed sanctions to do that is unclear.

But amid her silence, a long-held goal of the Myanmar military may be in sight - the full-scale expulsion of Rakhine state's supposedly illegal immigrants.

The military campaign has been brutal, according to eyewitness testimony collected by journalists and human rights advocates.

"Leave, or we will kill you all," an armed group of Rakhine Buddhist civilians told the Rohingya of one village, according to an exclusive Reuters report from Myanmar this week.

In some cases, that threat has been followed through. Reporting from the refugee camps in Bangladesh, The Washington Post's Annie Gowen spoke to people who fled the village of Maung Nu, which was incinerated by Burmese soldiers. Fortify Rights, a Southeast Asia-focused human rights organization, estimates the death toll in Maung Nu and three nearby villages to be 150.

"We were all watching what the military did. They slaughtered them one by one. And the blood flowed in the streets," a 10th-grade teacher named Soe Win told Gowen.

The Myanmar government says that at least 176 Rohingya villages have been completely emptied across three townships, or counties, of Rakhine state: Maungdaw, Buthidaung and Rathedaung. Sloshing through dangerous terrain, muddied by the monsoons, hundreds of thousands of people have made their way to Bangladesh.

Those who have survived the onslaught in the villages face land mines planted along the border, presumably aimed at killing escapees. Others make the treacherous crossing of the wide estuary of the Naf River, which separates Burma from Bangladesh. Hundreds have died in capsized boats, and boatmen have been charging exploitative rates for a ride that usually costs 50 cents, forcing some to spend or barter what little they carried on their backs.

Photos from Bangladesh have documented the incredible suffering of those making the perilous escape. Sons carry their feeble, aging parents in bamboo baskets across raging streams. Mothers weep over their drowned babies. A group gathers on the banks of the Naf, gazing back at the smoke rising from the fields they once called home, doubtful of what lies ahead.