Kellyanne Conway asked the journalist of his lineage, seeming to argue that Donald Trump's point was that every American has an immigrant history 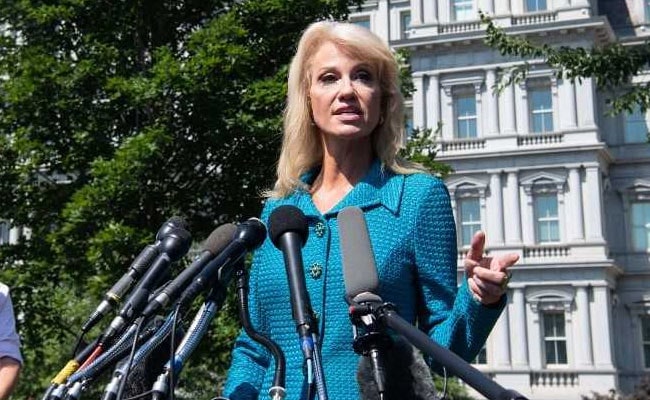 Andrew Feinberg, of Breakfast Media, wanted to know what countries the president was referring to when he made the comment about Reps. Alexandria Ocasio-Cortez of New York, Ilhan Omar of Minnesota, Ayanna Pressley of Massachusetts and Rashida Tlaib of Michigan. Each of the congresswoman are American citizens; three of whom were born in the United States. Omar was born in Somalia and became a U.S. citizen in 2000.

Conway, standing outside the White House, defended the president, saying he meant the congresswomen should go back to where their families were "originally" from. In the exchange, she asked Feinberg of his lineage, seeming to argue that Trump's point was that every American has an immigrant history, before offering that her family is from Ireland and Italy.

When reporters continued to push her for an answer, Conway said the president had already explained himself in subsequent tweets.

"He's tired," she said. "A lot of us are sick and tired in this country of America coming last to people who swore an oath of office."

Later, Conway tweeted that she'd meant "no disrespect" when asking about the reporter's ethnicity.

While Trump and his allies have said his tweets about the four congresswomen were not racist, but rather a commentary on their "socialist" ideology, Conway's husband, a frequent Trump critic, wrote an op-ed in The Washington Post titled, "Trump is a racist president."

"Naivete, resentment and outright racism, roiled in a toxic mix, have given us a racist president," George Conway wrote. "Trump could have used vile slurs, including the vilest of them all, and the intent and effect would have been no less clear."

Earlier, in a Fox News interview, Conway appeared displeased when asked whether she agreed with her husband's take.

"No, I totally disagree," she said. "But, I work with this president, I know him. I know his heart. I know his actions. I know how much he has helped people of color. And I go by what people do, not what other people say about them."

Conway added that she objected to being asked to comment on her husband's opinions, saying she's "not going to run around pointing out everybody's disagreements with the people in their lives. I sure could."

Conway took a similar tack with the reporters on Tuesday, telling them that she could "cherry-pick what each of you have said and made fools of yourself, but I won't. But I could."