What is a polar vortex? 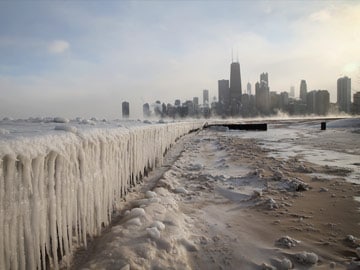 Lake frozen over in Chicago, Illinois.

Paris: The bitter chill gripping North America is a result of Arctic air that has spilled southwards, and global warming may be a cause. (Polar freeze moves to US South, East; 21 dead)

Arctic air is normally penned in at the roof of the world by a powerful circular wind called the polar vortex, said Dim Coumou, a senior scientist at the Potsdam Institute for Climate Impact Research (PIK) near Berlin. (In pics: Deep freeze in North America)

The weather shift is also helped by changes in a high altitude wind called the jet stream.

This convection, which usually encircles the northern hemisphere in a robust and predictable fashion, starts to zigzag, creating loops of extremely cold weather or unseasonably mild weather, depending on the location.

"We've seen a strong meandering of the jetstream, and the cold air associated with the polar vortex has been moving southwards, and in this case over the eastern parts of Canada and the United States, bringing this extreme cold weather," said Coumou.

The phenomenon has occurred repeatedly in recent winters, he noted.

What drives the polar vortex is the difference in temperature between the Arctic and mid latitudes, said Coumou.

Once sharp, this differential has blurred in recent years as the Arctic -- where temperatures are rising at about twice the global average -- warms up, he said.

"We've seen this type of cold spell more often lately in recent winters, in Europe but also in the US," Coumou said in a phone interview. (Parts of US colder than Mars)

"The reason why we see these strong meanderings is still not fully settled, but it's clear that the Arctic has been warming very rapidly. We have good data on this. Arctic temperatures have risen much more than other parts of the globe."

Last month, European scientists reported that the volume of sea ice in November was around 50 percent greater compared with a year earlier, following a recovery in the Arctic summer.

Despite this bounceback, sea ice remains at near-record documented lows and its overall trend is one of retreat, they said.

Coumou cautioned that Arctic sea ice "is just one of the important factors" behind disruption of the polar vortex".

"Other factors include snow cover, stratospheric warming events or other short-lived phenomena," he said.

Other specialists said the link between warming and the spillover of Arctic air was still debated.

"There is no consensus," said Francois Gourand, a forecaster at Meteo France, the French national meteorological agency.

Promoted
Listen to the latest songs, only on JioSaavn.com
"The melting of sea ice can have an impact on atmospheric circulation but these effects are complex and hard to pin down," he said.

"The overall trend of the sea ice is downwards, yet in Europe we can have mild winters sometimes, or cold winters -- there doesn't seem to be a clear link."