Wedding-Crashers Were Kicked Out, Came Back And Killed Groom: US Police

Hours after the picture was snapped, police said, the 30-year-old new husband was beaten to death by two strangers who had been kicked out after crashing the reception, police said. 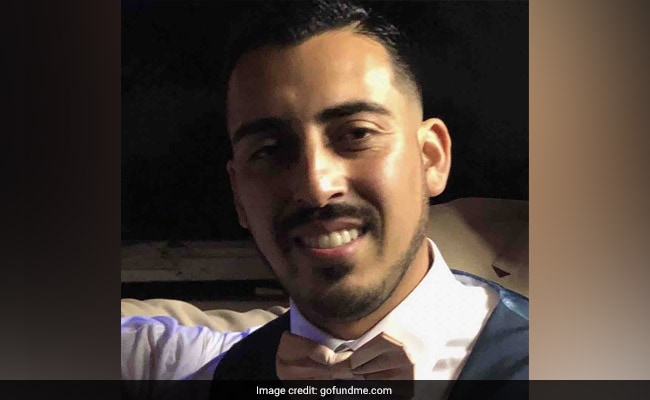 An online fundraiser has gathered nearly $30,000 for Melgoza's family as of Wednesday afternoon.

A photo on the bride's Facebook page captures the happiness that came before tragedy - the groom in a suit and pink bow tie, arm wrapped around his wife, smiling behind roses and a note that just says "Love."

Hours after the picture was snapped, police said, the 30-year-old new husband was beaten to death by two strangers who had been kicked out after crashing the reception, police said.

Many had left when the two suspects returned in the early hours of Sunday morning and started to argue with newlywed Joe Melgoza, ending up in an alley outside, said his brother Andy Velasquez, who has pieced together details from others' stories. Chino, California, police have said only that there was a "physical altercation," and Velasquez still isn't sure exactly how his brother ended up fatally wounded at another home nearby in Chino.

He wants justice, and answers in a slaying for which authorities have yet to announce a motive.

Rony Castaneda Ramirez, 28, and his 19-year-old brother Josue Castaneda Ramirez, both of Chino, have been charged with murder in Melgoza's death. Velasquez said the suspects killed Melgoza with a bat - the same weapon prosecutors say the men used to assault two other guests.

Both defendants have pleaded not guilty. Their attorneys did not respond to requests for comment Wednesday.

Velasquez said he was already driving away when the alleged attack unfolded. He turned the car around after hearing that people were looking for Melgoza. He said he drove in circles, yelling out his brother's name in the dark.

He remembered how Melgoza had beamed through Saturday's ceremony and party. He looked handsome. Velasquez said his brother was a "family man," father to an 11-year-old daughter.

"He was a prime example of what a man should be," Velasquez said.

Authorities have not said how they found the defendants, who were arrested Sunday afternoon without incident at a house in Chino. The suspects were unknown to wedding guests, police said.

Hours after the picture was snapped, police said, the 30-year-old new husband was beaten to death by two strangers.

The two men were arraigned Tuesday and are being held on bail set at more than $1 million each, court records showed.

When the suspects showed up earlier in the festivities, 24-year-old Velasquez said, it took a while for people to realize they weren't invited. They didn't cause trouble at first. Velasquez said he figured at the time that they knew someone.

They left after Melgoza confronted them, according to Velasquez.

Police said they responded at about 2:30 a.m. Sunday to a report of a fight and found two people with minor injuries. Later, they found Melgoza in the backyard of another residence, suffering from blunt force trauma to the head.

Authorities began "life-saving efforts" and transported Melgoza to Chino Valley Medica Center, where he died, according to police.

Other details of what happened are still under investigation, Chino Police Department Sergeant Dustin Tomicic told The Washington Post. Police are working to interview all witnesses, he said, estimating that the wedding party drew more than 200 people.

"So tragic and senseless."

"You don't know me but after hearing your story on the news I wanted to help you."

Melgoza's daughter will be "in good hands" with his family, the fundraiser said, stating that money not used for Melgoza's services will go toward the child's education.

"We're just trying to hang in there for her," Velasquez said Wednesday. He was headed to the funeral.

"Don't Get Too Riled Up": China Protests Covid Curbs But Fears Government Crackdown