The pair slacklined at a height of 42 meters (137 feet) above the crater of Mount Yasur in Vanuatu. 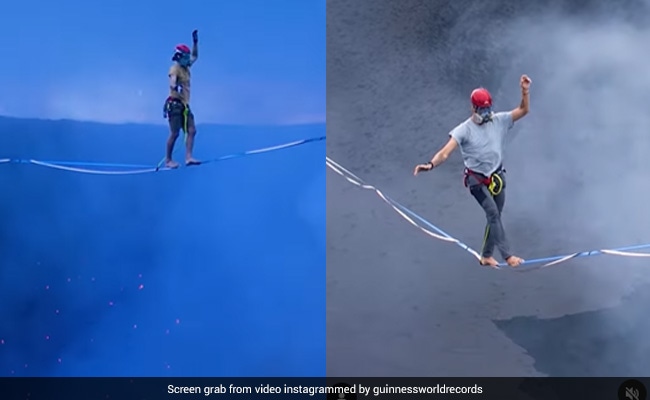 The pair was seen wearing a helmet and a gas mask while walking on the slackline.

Two adventure enthusiasts Rafael Zugno Bridi and Alexander Schulz have left internet users stunned after a video of their breathtaking record was posted on Instagram by Guinness World Record (GWR). The pair bagged a record for completing the longest slackline walk over an active volcano.

The fascinating video showed Rafael and Alexander walking barefoot on the longest slackline suspended over Yasur volcano on Tanna Island, in the southwestern Pacific Ocean.

According to the caption of the social media post, the pair slacklined at a height of 42 meters (137 feet) above the crater of Mount Yasur in Vanuatu.

The clip showed Rafael and Alexander wearing a helmet and a gas mask while walking on the 261 meters (856 feet) long slackline. At one moment, the video even showed the volcano erupting its cinders while the two continued with their walk.

Since being shared, the clip has garnered more than 20,000 likes and over 270,000 views. Internet users lauded the two adventure enthusiasts and even claimed that this is the actual record that they have ever encountered.

One user wrote, "Finally found an actual record." Another said, "See now this is something worthy of credit".

A third commented, "Legendary," while a fourth added, "This dude deserves 2 awards one for crossing and the other for surviving." Several social media users also flooded the comment section with heart, fire and clapping emojis.

Meanwhile, in another amazing feat, a man broke the GWR for driving a sports car in reverse. Scot Burner drove a 2017 white Corvette in reverse for over 1.6 km for 75.18 seconds, which was captured on camera and shared on the Facebook page of NCM (National Corvette Museum) Motorsports Park, according to Fox News. By doing so, he beat the previous record of 97.02 seconds.

The record-breaking attempt was done on June 15 and certified recently by Guinness officials after analysing the video and data collected.