The eclipse was captured with Perseverance's next-generation Mastcam-Z camera on the 397th Martian day. 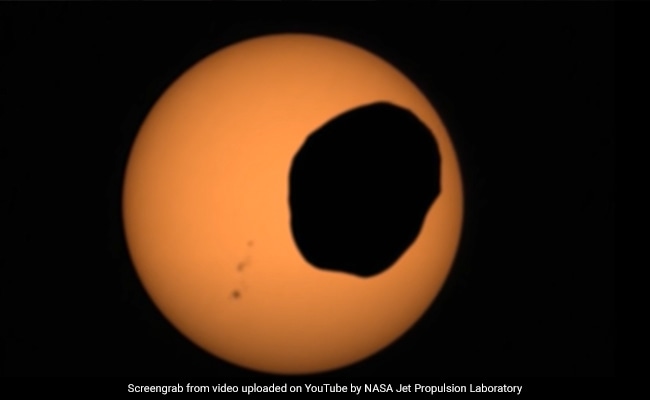 The eclipse lasted a little over 40 seconds.

US space agency National Aeronautics and Space Administration's (NASA) Perseverance Mars rover has captured a mesmerising video of a solar eclipse on the Red Planet. According to NASA's Jet Propulsion Laboratory (JPL), the camera onboard the SUV-sized rover captured the footage of Phobos, Mars' potato-shaped moon, crossing the face of the Sun.

“These observations can help scientists better understand the moon's orbit and how its gravity pulls on the Martian surface, ultimately shaping the Red Planet's crust and mantle," the American space agency said in a statement.

The eclipse was captured with Perseverance's next-generation Mastcam-Z camera on the 397th Martian day. According to NASA, the new shots provide the most powerful view of such an event, featuring a high frame rate not used before on the Martian surface. “I knew it was going to be good, but I didn't expect it to be this amazing,” said Rachel Howson of Malin Space Science Systems in San Diego, one of the Mastcam-Z team members who operate the camera.

As per the JPL team, the eclipse lasted a little over 40 seconds - much shorter than a typical solar eclipse involving Earth's Moon. This is because Phobos is about 157 times smaller than Earth's Moon, the team said. Further explaining the structure of Mars from the observations, NASA's JPL said that as Phobos circles Mars, its gravity exerts small tidal forces on the Red Planet's interior, slightly deforming rock in the planet's crust and mantle.

“These forces also slowly change Phobos' orbit. As a result, geophysicists can use those changes to better understand how pliable the interior of Mars is, revealing more about the materials within the crust and mantle,” the team said.

Meanwhile, it is to mention that scientists believe that Phobos is doomed. NASA explained that Phobos is getting closer to the Martian surface and is destined to crash into the planet in tens of millions of years. However, the space agency added that the recent eclipse observations from the surface of Mars over the last two decades have also allowed scientists to refine their understanding of Phobos' slow death spiral.