A German man with a Rubik's cube passion has set a Guinness World Record with his collection of rotating puzzles. 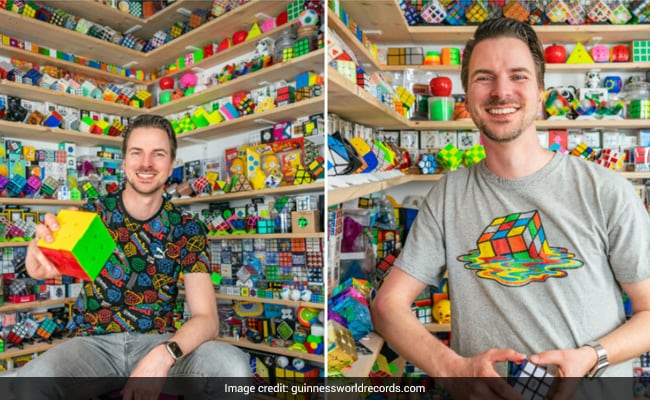 According to GWR, his creations range from traditional Rubik's cubes to colourful ones shaped like balls, homes, and even fruit. He has dedicated a whole room to his puzzles at his residence in Mindelheim but he believes that the space is becoming too small for his ever-expanding collection.

The shortage of space, however, does not stop Mr Kastenmeier, and he continues to seek out the rarest and most intriguing artefacts with his wife and children.

His family and friends are enthusiastic about his passion, and they have shared the joy of having his name appear in the Guinness World Records 2023 book with him, GWR further said.

"Knowing that you've achieved something that nobody had done before you is incredible," he added.

A video has been posted by the official YouTube handle of Guinness World Record on Friday that shows Mr Kastenmeier telling about his unique collection of puzzles.

"Florian Kastenmeier from Germany began his puzzle cube collection sixteen years ago, but now it's grown to be a world record collection," the caption reads.

Within just one day, the video has amassed over 30,000 views and still counting.

Mr Kastenmeier's obsession with spinning puzzles began in the same way that many other fantastic stories do by chance. He used to possess several Rubik's cubes as a youngster, but he couldn't solve them and quickly lost interest in the puzzles, GWR said.

But it leads to a drastic change 16 years back when he found an old Rubik's cube in the attic while moving. It was most likely one of the cubes he had ignored as a youngster and had been abandoned for years. However, the puzzle now provided a completely different obstacle.