DNA, Facebook Use And A Sword Among Evidence In US Quadruple Murder Trial

Witnesses testified about the final movements, texts and phone calls made by the victims. Jurors heard about weapons used inside: two baseball bats, a knife and a sword 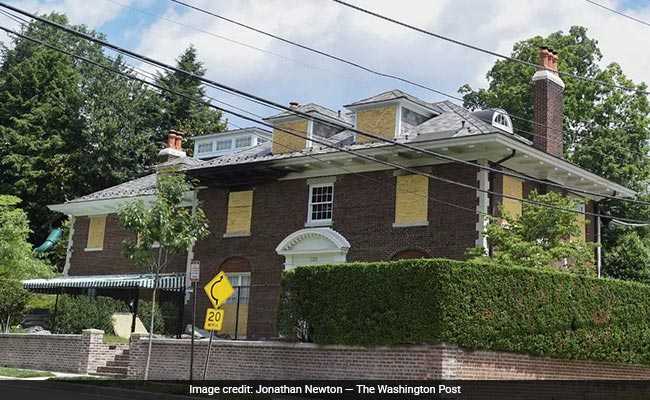 With the bedroom around him illuminated by bright orange flames, D.C. firefighter Michael Ader crawled on the floor to escape the intense heat as he searched for survivors.

Above him, large shards of slate from the roof began falling through the ceiling into the room like blades of glass. Ader, like many of firefighters who responded to fire on Woodland Drive in Washington on May 14, 2015, had never seen a blaze this intense in a house. The firefighters smelled gasoline.

Ader extended his right hand to help guide his way through the smoke. He came to a chair and, working his way up, felt a body. As he recently recounted the day for jurors, Ader remembered finding it difficult to get a strong grip on the victim. When he finally pulled the person into the hallway near a broken window, he said, he saw the wounds that explained why.

"It was a bloodbath," Ader said.

Over the past three weeks, federal prosecutors in D.C. Superior Court have tried to outline for jurors the details of four killings that occurred in the house before firefighters arrived that May afternoon three years ago.

Witnesses testified about the final movements, texts and phone calls made by the victims. Jurors heard about weapons used inside: two baseball bats, a knife and a sword. And witnesses told the jury about the activities of the man authorities say was responsible for the quadruple slayings, 36-year-old Daron Wint.

Wint is charged with four counts of first-degree premeditated murder, arson, kidnapping and other crimes associated with the killings of Savvas Savopoulos, 46, his wife Amy, 47, their son Philip, 10, and the family's housekeeper, 57-year-old Veralicia "Vera" Figueroa. Authorities allege Wint committed the crimes to get $40,000 in ransom.

Witnesses at trial have pieced together a chronology starting the morning of May 13, 2015, which began with normal activities for the family.

Amy Savopoulos took Philip, who was sick and home from school, to a doctor for a 9:30 a.m. appointment. Authorities found a parking garage ticket inside her Range Rover that says she left the Chevy Chase Center at 10:47 a.m. to return home.

Two employees at the Australian ambassador's residence, across the street from the Savopouloses' home, testified they saw a man fitting Wint's description casually going into the garage around noon on May 14, about 90 minutes before firefighters were called to the house.

Figueroa, who went to work that morning, was never seen again by her family. Family members testified they began to worry when she failed to return home that evening.

"It's like building a puzzle," James Martin, Amy Savopoulos' father, whispered to a family friend sitting next to him in the courtroom audience.

A puzzle, prosecutors hope, that will result in Wint's conviction and a life prison sentence.

Wint's public defenders Judith Pipe and Jeffrey Stein, though, contend their client was not involved in the killings.

The defense attorneys say Wint's brother and half brother committed the crimes. Neither has been charged with a crime. The attorneys argue Wint was summoned to the home by his brothers but remained downstairs, not knowing four victims were upstairs in two adjoining bedrooms.

Soon after the killings, D.C. police said they believed several people committed the crimes. But, as the investigation progressed, Wint was the only one arrested.

Prosecutors now contend Wint, who once worked for a Savopoulos family business, restrained, beat, stabbed and strangled all four people by himself, using Philip as leverage to force the adults to cooperate. They said he poured gasoline on the victims and set them on fire.

Wint's stepmother testified that on the evening of May 13, Wint did not return to the home he shared with her, his father and his younger sister. She also spoke of helping Wint with his immigration papers when he moved to the United States from Guyana. As she spoke, Wint never looked up from the table where he sat between his attorneys.

A computer expert testified that Wint was an avid Facebook user, posting messages, photos or making phone calls through the application dozens of times in a day in the days and weeks leading up to the killings. But on May 13, Wint had no Facebook posts and made no phone calls, the expert said, and he didn't resume until late in the evening of May 14.

Employees at Savvas Savopoulos' business, American Iron Works, a Maryland-based custom steel and iron manufacturing company, told the jury they thought it was odd when he contacted them on the evening of May 13 and asked them to arrange to have $40,000 in cash withdrawn from the bank and dropped off at his garage by an assistant. But they did what Savopoulos asked, because he was the boss.

Prosecutors say the motive for the kidnapping and killings was robbery, but crime scene photos show many valuables left in the house including a Rolex watch, wallets, cash and several large unopened safes in the house and garage.

The photos show the brutality of the attacks, with one depicting the bloodstained wood floor where Savvas and Amy Savopoulos were found dead. Others offer glimpses of the family's life before the tragedy; three toy red cars on the living room coffee table next to a recent edition of the Fiske Guide to Colleges. The Savopouloses' two teenage daughters were at boarding school when the attack happened.

More than 170 items associated with the killings were tested for DNA.

Prosecutors showed the jury a sword, which Savvas Savopoulos kept as part of a martial arts collection. A DNA expert testified that Philip's blood was on it. Prosecutors also showed the jury two bloody bats, one of which had been a gift to Philip from one of his grandfathers.

Next week, prosecutors are expected to call medical examiners and bone experts to testify. Jurors are also expected to hear more details about Wint's arrest, about a week after the slayings. Prosecutors say he fled to New York and was found with cash they say was from the ransom.

When the prosecution finishes, in about two weeks, Wint's attorneys will have the opportunity to put on their case.

It has been a challenging time for family members of the victims who attended the proceedings. Amy's father James Martin, a retired Army colonel, usually sat looking straight ahead. Savvas Savopoulos' father, Philip, often watched with his hands covering his mouth. And Gail Savopoulos, Savvas's mother, sat in front of them with a victim advocate from the U.S. Attorney's office.

A particularly difficult moment came when prosecutors showed a photo of Philip's charred body on the bed.

During a break in the testimony Thursday as a DNA expert was on the witness stand, Assistant U.S. Attorney Laura Bach left the well of the courtroom and sat next to Gail Savopoulos, checking on her.

"The one piece of comfort I hold onto in all of this is that at least they were together when they died," Bach told her of Savvas and Amy, the couple who had known each other since attending high school in Montgomery County and started dating while in college. Gail Savopoulos leaned over, bowed her head and nodded and began silently crying.

(Except for the headline, this story has not been edited by NDTV staff and is published from a syndicated feed.)
Comments
Washington Quadruple murderDC Quadruple Murder