Opinion polls show Vladimir Putin with a commanding election lead, all but guaranteeing him another term. 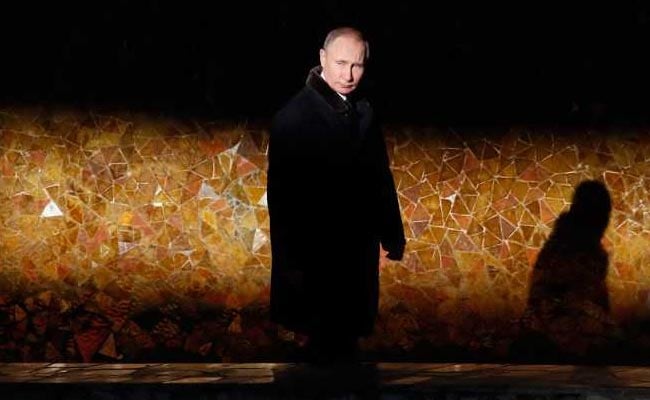 MOSCOW/ YEKATERINBURG: Russian voters are set to propel Vladimir Putin to another term as president in an election on Sunday, giving him credit for standing up for Russia against Western governments that view him as a dangerous autocrat.

Opinion polls show Putin, 65, with a commanding election lead, all but guaranteeing him another term that will take him to nearly a quarter century in power -- a longevity among Kremlin leaders second only to Josef Stalin.

The only thing that could dampen Putin's poll triumph is if voter apathy at a predictable contest leads to a low turnout, or if the minority of Russians who vocally oppose him take to the streets to protest against what they see as an undemocratic farce.

In an election campaign where Putin has benefited from glowing coverage on mainstream television, he has cast himself as the only person who can defend Russia's national interests in a hostile world.

"We will withstand this onslaught," Svetlana Andrus, a ribbon round her neck in the colours of the Russian flag, said during a rally in Moscow in support of Putin. "We will support our country and Vladimir Vladimirovich (Putin)."

Putin's supporters point to Russia's military intervention in Syria and its annexation of Ukraine's Crimea region in 2014 as proof of his patriotic credentials. They say U.S. and European sanctions imposed over the Ukraine crisis are a price worth paying.

A row with Britain over allegations the Kremlin used a nerve agent to poison a Russian double agent in a sleepy English town -- denied by Moscow -- has not dented his standing.

A March 9 survey by state-run pollster VTsIOM gave Putin, who was first elected president in 2000, support of 69 percent. His nearest rival Pavel Grudinin, the Communist Party's candidate, is on just 7 percent.

Another candidate, Ksenia Sobchak, a TV presenter and family friend of Putin, has upended expectations by robustly criticising the Kremlin, but she has only 2 percent support, the same survey showed.

Kremlin officials acknowledge that Putin's dominance could turn people off voting. A low turnout would dent his legitimacy within the ruling elite, founded in part on his ability to command popular support.

In Yekaterinburg, an industrial city in the Ural mountains, unemployed 38-year-old Sergei Khaziev described the election as a "circus performance which for some reason is described as elections... I won't turn out this time."

The first politician in years to challenge the Kremlin's grip on power, Alexei Navalny, is not on the ballot. He was barred because of a corruption conviction he says was fabricated by the Kremlin.

Navalny, who uses social media to whip up anger among his mainly young followers over official corruption, is pushing an election boycott.

"Our boycott campaign is working," he said this week. As evidence, Navalny pointed to a drive by officials to encourage people to turn out to vote by offering discounted food at polling stations. He also said state officials were applying pressure on civil servants and students to vote.

Though winning another term is virtually assured, governing Russia for another six years will throw up plentiful challenges.

Buffeted by lower oil prices and the effect of Western sanctions, Russia's gross domestic product expanded by only 1.5 percent last year, well below the robust growth Russians had come to expect in the earlier years of Putin's rule.

Putin has spoken of the need to revive economic growth but the steps that many economists prescribe - especially shrinking the state's role in the economy - are resisted by those in the president's circle who owe their status and wealth to the state.

His next term may also be overshadowed by uncertainty over his plans once it ends. Term limits bar him from running for another consecutive term, and Putin has said he will not change the constitution to extend his time in office.

Sources inside Russia's ruling elite say they anticipate he will repeat the manoeuvre he deployed in 2008, the last time he faced term limits, when a loyal lieutenant took over the presidency while Putin governed from behind the scenes.

Promoted
Listen to the latest songs, only on JioSaavn.com
If Putin, who will be 71 when his next term ends, wants a peaceful retirement, however, he will have to try to engineer a succession. That risks unleashing simmering tensions between rival groups in the ruling elite.

Voting starts in the far east of the vast Russian Federation at 8 am local time (2000 GMT on Saturday) and will roll westwards over 11 time zones, with polling booths in the Baltic enclave of Kaliningrad due to close at 1900 GMT on Sunday.
© Thomson Reuters 2018