Virginia Gunman Who Killed 12, Stayed Up At Odd Hours, Say His Neighbours 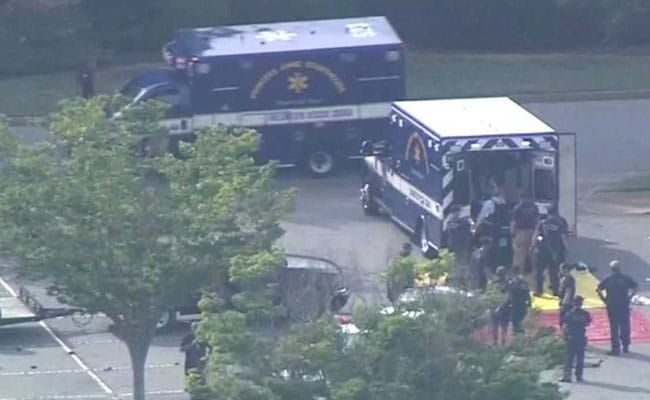 Police in Virginia searched Saturday for the reason why a city engineer fired indiscriminately on his workplace colleagues, turning a municipal building into a war zone as he killed at least 12 people and wounded four before being fatally shot himself.

To focus attention on the latest victims of America's gun violence epidemic, officials said they would not pronounce his name again in public.

Craddock, killed in a fierce gun battle with police, was a current employee of the public works department of Virginia Beach and had worked there for about 15 years, police chief James Cervera told a news conference.

He declined to say if Craddock had been disciplined in recent weeks. Press reports said the gunman had served in the Army National Guard after graduating from high school.

Craddock was armed with two .45-caliber pistols, both of which appeared to have been legally purchased, said Ashan Benedict of the Bureau of Alcohol, Tobacco, Firearms and Explosives (ATF).

At least one of the guns was equipped with a sound suppressor and Craddock reloaded with several high-capacity magazines, Cervera said.

Two other guns were found at Craddock's home, where he lived alone. One had been legally purchased, while authorities were working Saturday on tracing the other.

US President Donald Trump tweeted that he had spoken by phone to Virginia Governor Ralph Northam and to Virginia Beach officials to offer his condolences, adding, "God bless the families and all!"

He also ordered US flags to fly at half-staff until sunset Tuesday.

Northam, speaking at a prayer vigil outside a movie theater, asked rhetorically, "Why do these tragedies happen? And I don't have an answer for that, but God knows... And God is in control here."

City Manager Dave Hansen began the news conference by showing photos of the 12 who were killed -- seven men and five women -- as he slowly read their names out. All but one worked for the government in the coastal city, which is about a four-hour drive southeast of Washington.

Police responding Friday to emergency calls from the municipal center, a campus of 30 red brick buildings, engaged the shooter within minutes, Cervera said.

People locked themselves inside offices and cowered on the floor as the gun battle raged. Bullet casings littered the floor, news reports said.

The victims were found on all three floors of the building.

"This was a long-term, large gun battle," the police chief said. One officer was shot but survived thanks to his bullet-proof vest.

Of the four wounded, three were in critical condition and one was in fair condition on Saturday, city officials said.

'The Most Devastating Day'

The large building where the shooting took place in Virginia Beach -- a city of 450,000 people that is home to a major Navy base -- housed the city's public works and utilities offices.

"This is the most devastating day in the history of Virginia Beach," Mayor Bobby Dyer told reporters Friday night. "The people involved are our friends, co-workers, neighbors and colleagues."

Dozens of mourners, many of them sobbing, gathered in the parking lot where Northam spoke to pay tribute to the victims.

Anthony Moore called the scene "very surreal," adding, "I didn't think anything like this would ever happen in our town."

Megan Banton, a public utilities employee, told local television station WVEC that during the chaos she and about 20 co-workers hid in an office, where they used a desk to wedge the door shut.

"We just wanted to try to keep everybody safe," she said, adding that the wait for police to arrive felt like "hours."

A neighbor who lived downstairs from Craddock said the man kept to himself and was up at odd hours.

"You heard him walking around. He would drop stuff at like 2 am, and me and my roommate would try to figure out what he was doing," Cassetty Howerin told CNN affiliate WAVY.

"He was very to himself."

According to the Washington-based Gun Violence Archive monitoring group, Friday's shooting was the 150th mass shooting -- with four or more people shot or killed -- in the United States this year.

"We're only 151 days into 2019 and there have already been 150 mass shootings. This reality is horrifying," tweeted Gabrielle Giffords, a former congresswoman who was seriously injured in a mass shooting in 2011.

US gun ownership laws are among the most lax in developed countries, and legislative efforts to address the issue have long been deadlocked.

But among Democrats, the response to the latest shooting was pointed.

House Democratic leader Nancy Pelosi decried the "devastating toll" of gun violence. Noting that the House had already passed "commonsense, bipartisan" gun legislation, she added, "The Senate must bring these bills to a vote."