After Getting Death Threats, US Lawmaker Says She "Misspoke" On Abortion

When Virginia Del. Kathy Tran was asked by a Republican lawmaker during the hearing whether the bill would allow an abortion to occur when a woman is in labor and about to give birth, she said yes. 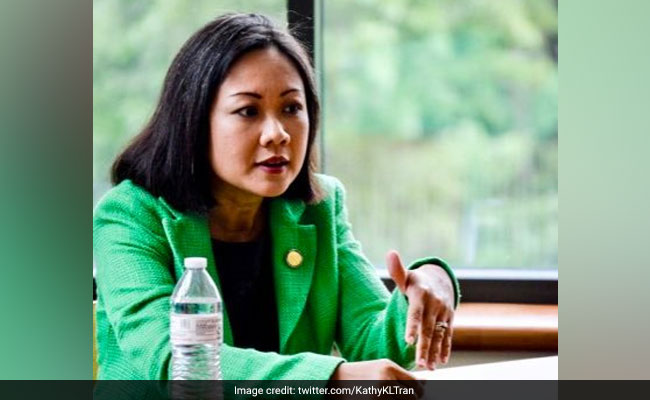 Virginia Del. Kathy Tran said Thursday that she "misspoke" during a legislative hearing earlier this week about a bill that would have loosened restrictions on late-term abortions.

Her comments, which were circulated by Republicans and went viral on social media, have sparked death threats and an intense backlash that includes GOP politicians such as President Donald Trump.

"I wish that I was quicker on my feet, and I wish that I was able to be more agile in that moment," Tran, 41, a first-term Democrat from Fairfax County, said Thursday in a telephone interview. "And I misspoke, and I really regret that."

When she was asked by a Republican lawmaker during the hearing whether the bill would allow an abortion to occur when a woman is in labor and about to give birth, Tran said yes.

But on Thursday, Tran, a mother of four, corrected herself. "I should have said: 'Clearly, no because infanticide is not allowed in Virginia, and what would have happened in that moment would be a live birth.' "

The edited video of Tran's testimony led some on Twitter to call Tran a "baby killer" or "a demonic creature." Trump also weighed in, saying he had seen the video, and called Tran's testimony "terrible."

"Do you remember when I said Hillary Clinton was willing to rip the baby out of the womb?" Trump told the Daily Caller Wednesday. "That's what it is. That's what they're doing."

Tran said she and her family have received death threats through telephone messages, email and social media, leading to extra police protection for her at the state Capitol in Richmond, and for her family in West Springfield.

She declined to discuss specific details about the threats, but she said "some of them were credible," prompting "an extra set of eyes" from police. She said she has tried to explain the situation over the past two days to her three older children, who are in elementary school.

"It's a very tough conversation to have with your little ones about how they need to be safe and watch out for themselves, and that it's OK to ask for help," Tran said. "I love my kids dearly. They are my world, and their safety is my No. 1 priority."

The intensity of the backlash moved one of the bill's 22 Democratic co-sponsors to back away from the legislation, even though it had already been tabled in committee on Monday, and was identical to bills that had been proposed in the General Assembly and failed in past years.

"I vaguely remember signing on to this, and I did this in solidarity with my colleague and as a symbolic gesture for a woman's right to choose," Del. Dawn Adams, D-Richmond, wrote in a letter to constituents. "I am sorry that I did not exercise due diligence before this explosion of attention."

Northam, a pediatric neurologist, was asked about the issue in a radio interview and gave an answer about prognosis and medical treatment that Republicans later used to suggest he favored killing live babies.

The procedures are "done in cases where there may be severe deformities," Northam said in a WTOP radio interview. "There may be a fetus that's not viable. So in this particular example, if a mother's in labor, I can tell you exactly what would happen. The infant would be delivered, the infant would be kept comfortable, the infant would be resuscitated if that's what the mother and the family desired. And then a discussion would ensue between the physicians and the mother."

Late-term abortions are already permitted under Virginia law when the mother's life or health would be "substantially and irredeemably" harmed by continuing a pregnancy, as certified by three physicians.

There is no time limit on third-trimester abortions; the procedure may take up until delivery.

Tran's bill would have removed the phrase "substantially and irredeemably" when it comes to defining the risk a mother would face by continuing the pregnancy. It also would have required just one physician to certify the need for the procedure, instead of three. And it would have allowed second-trimester abortions to be performed in a clinic, instead of a hospital.

"I've had women in my family, women in my district and women across Virginia who've told me that they've really had to grapple with the very personal, private decision as to whether or not they're going to have an abortion," Tran said about her decision to put her bill forward. "This bill would have repealed these barriers for them to access safely this medical service in consultation with their doctor."

She noted that consideration of the same legislation in previous years did not prompt similar reaction from Republicans.

Tran arrived in Richmond last year as part of a wave of Democratic women whose electoral victories in Northern Virginia nearly leveled the balance of power in the General Assembly, narrowing the GOP majority in each chamber to two seats.

Democrats hope to win majorities in the House and the Senate in November, when every seat in the legislature is on the ballot.

The first Asian-American woman to win a seat in the Virginia House, Tran came to the United States as a Vietnam refugee during the late 1970s, when she was an infant, according to her campaign website.

After earning a master's degree in social work from the University of Michigan, Tran worked at the U.S. Department of Labor, then joined the National Immigration Forum advocacy group.

In 2017, Tran ran for the seat being vacated by retiring Del. Dave Albo, R-Fairfax. She says she decided to seek public office after realizing that her fourth baby was due on the day that Trump would be inaugurated as president of the United States.

Tran campaigned on a platform that includes immigration restructuring, equal pay for women and expanding Medicaid in Virginia, beating Republican Lolita Mancheno-Smoak by 22 points. She often brought her infant, Elise, campaigning with her, strapped in a carrier that she wore on her chest.

Once in Richmond, Tran drew attention for nursing Elise - by then a year old - on the House floor. She and Del. Jennifer Carroll Foy, D-Prince William County, worked with first lady Pam Northam to establish lactation rooms at the Capitol, and started an informal "parents' caucus" to help members - male or female - deal with the tricky issues of raising young children while serving in the legislature.

On Thursday, Tran sought to return to normalcy.

She issued a video statement that tried to explain the intent of the bill she introduced, and she prepared to advocate for other bills she's sponsored - including one that would extend the statute of limitations on misdemeanor sexual offenses involving minors.

She also continued with plans for a joint town hall meeting Saturday with Sens. Scott Surovell, D-Fairfax, and George Barker, D-Fairfax, to discuss taxes, transportation and other concerns in her district.

That event will include an extra layer of security, Tran said, adding that she hopes the conversation will be free of controversy.

She called the use of her testimony by the Republican Party of Virginia - which sent out the edited clip in a fundraising email Wednesday - a sad reminder of the country's broken political discourse.

"I understand that there's a lot of passion on both sides with any issue," Tran said. "I think it's really important that we get the whole story and have a civil discourse. We must be able to continue to listen to one another and not just shout and base things off of 30-second clips."

(Except for the headline, this story has not been edited by NDTV staff and is published from a syndicated feed.)
Comments
Kathy TranVirginia DelegateAbortion Bill