Authorities in China decided to lock the store down after a close contact of a COVID-19 patient was traced to the location. 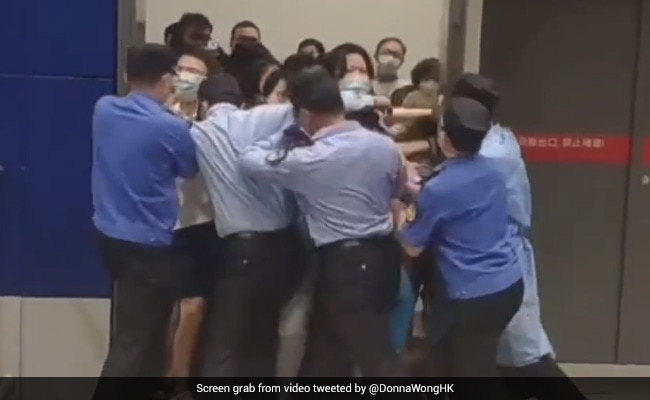 Guards at Ikea try to close the doors of the store in Shanghai on Saturday.

A video going viral on social media shows chaotic scenes at an Ikea store in China's Shanghai, with shoppers trying to escape and authorities attempting to quarantine them. According to CNN, the incident took place in Xuhui district on Saturday when health authorities moved to lockdown the store after a close contact of a COVID-19 case was traced to the location. The Chinese government had clamped a severe two-month lockdown in Shanghai earlier this year to curb the spread of coronavirus as part of the country's "zero-COVID" strategy.

The video shows the guards trying to close the doors, but the crowd forced them open to escape the store.

Yesterday, an abnormal health code case was presented at an IKEA in Shanghai, & the entire mall was suddenly blocked????

Some ppl forced their way out for fear of being sent to concentration camps, but there is actually nowhere to escape under #AmazingChina's digital surveillance pic.twitter.com/MWpbTOJ3kz

Other videos from inside the store show locals yelling and pushing each other in a bid to escape the building as an announcement blared over its sound system saying the mall was being locked down due to COVID contact tracing.

Ikea has so far not officially commented on the incident.

News agency Reuters reported that Shanghai, the most populous in China, reported five new local infections of coronavirus, all asymptomatic, on Saturday, while 2,467 domestically transmitted cases were reported nationwide.

It has extended its weekly COVID-19 test requirement and extended free testing until the end of September in a bid to keep the virus in check.

CNN quoted deputy director of the Shanghai Health Commission Zhao Dandan as saying that the "store and affected area" would be under "closed loop" management for two days.

According to the BBC, the person who caused the authorities to seal the store was a close contact of a six-year-old boy who tested positive after returning to Shanghai from Lhasa in Tibet. However, Mr Zhao did not say when the close contact was believed to have been at the store.

By Sunday, nearly 400 close contacts of the six-year-old boy had been traced while 80,000 people had been ordered to undergo PCR testing, the BBC report further said.