The Stonehenge monument is one of the many locations throughout the country to honour the Queen's seven-decade reign. 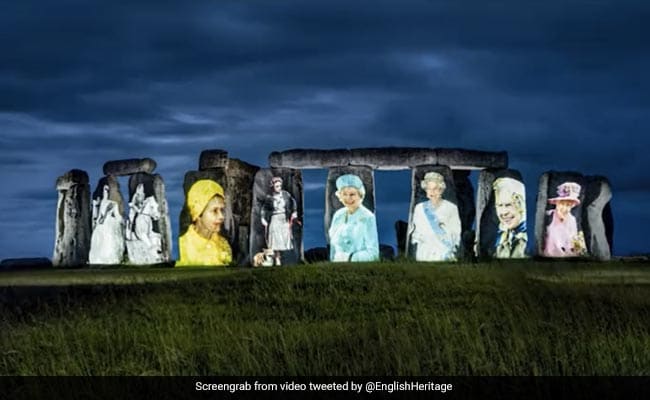 Platinum Jubilee celebrations will take place from June 2 to June 5.

Portraits of Queen Elizabeth II throughout her 70-year reign have been projected onto Stonehenge ahead of her Platinum Jubilee celebrations. English Heritage, a charity that manages over 400 historic buildings, monuments and sites, had announced that the 5,000-year-old stone monument in Salisbury, England, received a temporary makeover to honour the 96-year-old monarch.

“We've brought two British icons together to mark the #PlatinumJubilee!” English Heritage wrote on Twitter, adding that each picture is from a different decade of The Queen's reign.

We've brought two British icons together to mark the #PlatinumJubilee! ????

We've projected eight portraits of Queen Elizabeth II onto Stonehenge. Each picture is from a different decade of The Queen's reign. pic.twitter.com/bnJZeONKXe

According to USA Today, the eight portraits displayed on Stonehenge include a photo from the Queen's coronation in 1953, an action shot of her riding a horse in the 1960s, an appearance at the Royal Windsor Horse show in 2017 and more. The Stonehenge monument is one of the many locations throughout the country to honour the Queen's seven-decade reign, which began when she was just 27-years-old.

Queen Elizabeth II is the first monarch in the British institution's thousand-year history to celebrate Platinum Jubilee. Additionally, she is Britain's oldest and longest-reigning monarch and also the longest-serving female head of state in the world.

Celebrations will be observed in the UK with a four-day public holiday from June 2 until June 5. Festivities will kick off with the Queen's Birthday Parade, an annual parade of royal officers, horses and musicians attended by the royal family, known as Trooping the Colour. The celebrations will end on Sunday with a Platinum Jubilee Pageant, followed by a party at Buckingham Palace.