The group of women attacked two 19-year-old girls. They swiped their cellphones, credit cards, wallets and other items, the cops said. 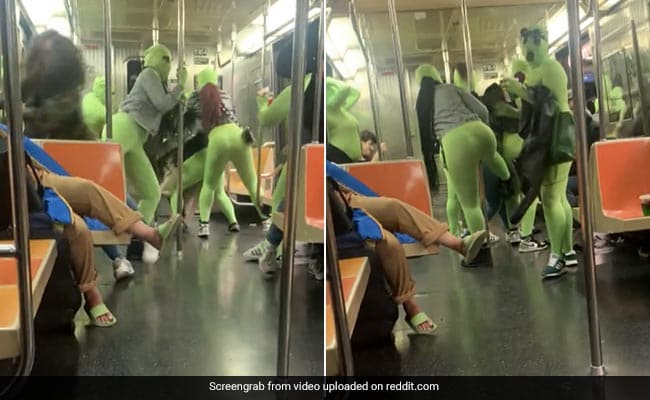 The cops informed that the robbers are still in the wind.

A video showing a bizarre group of female robbers creating a ruckus inside a subway train in New York, US, is going viral on social media.

The clip, shared on Reddit, showed about six females dressed in full-body neon green leotards tossing around one passenger and punching another repeatedly in the face. According to the social media post, the incident took place on a Times Square subway train at around 2am on Sunday.

As per New York Post, the group of women attacked two 19-year-old girls. They swiped their cellphones, credit cards, wallets and other items, the cops said.

Speaking to the outlet, the mother of one of the victims called the group of women the "Green Goblin Gang". She said that her daughter and her friend were attacked by "complete animals" on Sunday.

"She said she was attacked by aliens, and I didn't know what she was talking about," the mother told the Post, adding, "This is how she spent her 19th birthday. I hope they get what they deserve and then some because it's disgusting."

Further, she said that her daughter is a business and international business major at a college in Florida and was back home visiting the family in Queens over the weekend. "She was home from college. Now she's getting chest X-rays and CAT scans," the mother said.

She also informed that her daughter suffered serious injuries from being stomped in the head by "10 grown-a** women". "She's in excruciating pain. When she breathes, it hurts. In one video, you can see the one girl kicked her and got her foot caught in my daughter's purse strap. My daughter is tiny. She's 5 foot 4. That one beast," the mother added.

The officials informed that the robbers are still in the wind. The distressed mother said city and state officials should take note of the terrifying incident.