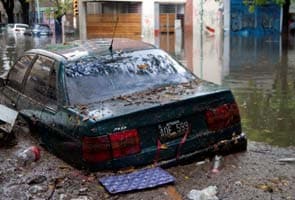 More than six inches (155 mm) of rain fell between midnight Monday and 7 am Tuesday, the city weather service said, setting an April record for the Argentine capital.

One of the dead was a subway worker electrocuted while trying to pump water out of a flooded station, union official Enrique Rosito said.

Other victims included three men and two women killed in flooding and other damage caused by the storm, said Alberto Crescenti of the emergency medical service SAME.

Some 350,000 people were impacted by the deluge, Mayor Mauricio Macri told a televised news conference.

Flash flooding was worst in northern parts of the city, where widespread construction over the past decade has not been matched by upgrades to the drainage system, environmentalists said.

It was here that about 300 people were evacuated from a slum, Macri said.

About 14 million people live in Buenos Aires and surrounding areas.

Promoted
Listen to the latest songs, only on JioSaavn.com
A weather alert remains in effect for the metropolitan area through Thursday.