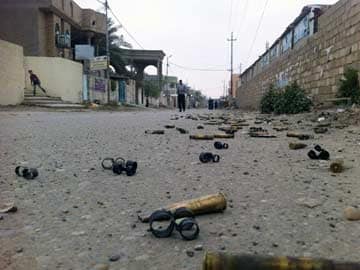 Iraq has been hit by a year-long surge in bloodshed that has reached levels not seen since 2008, driven principally by widespread discontent among its Sunni Arab minority and by the civil war in neighbouring Syria.

The source of the fire, which resident Jassem Mohammed al-Essawi said hit four different areas, was not immediately clear.

Anti-government fighters subsequently seized Fallujah and parts of Ramadi, to its west.

It is the first time anti-government forces have exercised such open control in major cities since the peak of the deadly violence that followed the US-led invasion of 2003.

Some 380,000 people may have been displaced by the latest crisis in Anbar, according to the United Nations.

In Saadiyah, northeast of Baghdad, gunmen shot dead municipal council member Hussein al-Tamimi and another person on Friday, a police lieutenant colonel and a doctor said.

Promoted
Listen to the latest songs, only on JioSaavn.com
Friday's deaths came a day after more than a dozen bombings and two shootings killed at least 23 people and wounded dozens.

Violence in Iraq has killed more than 1,800 people since January 1, according to AFP figures based on security and medical sources.