Police in Wildwood, New Jersey, are investigating a viral video that shows an officer punching a woman's head at least twice on the beach. 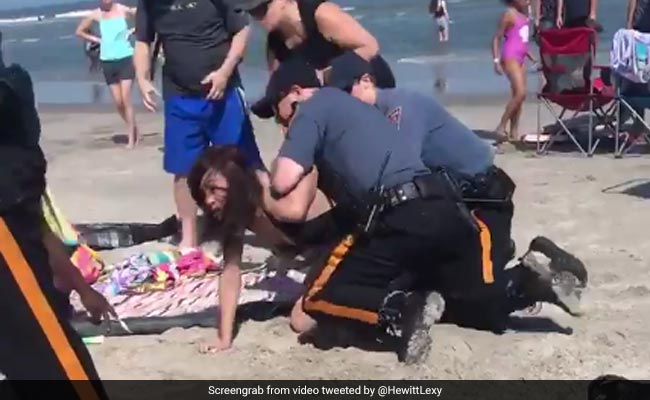 Several beachgoers crowd around and can be heard repeatedly warning Weinman to "stop resisting."

Police in Wildwood, New Jersey, are investigating a viral video that shows an officer punching a woman's head at least twice on the beach before wrestling her into the sand over Memorial Day weekend.

In the video, which Wildwood Police Chief Robert Regalbuto called "alarming," two officers are seen trying to subdue a woman, whom police have identified as Emily Weinman, a 20-year-old from Philadelphia. One of the officers punches Weinman's head at least twice, and she screams and flails as the other officer tries to pin her legs to the sand.

Several beachgoers crowd around and can be heard repeatedly warning Weinman to "stop resisting." She is heard shouting, again and again, "You're not allowed to hit me and choke me like that."

"I didn't do anything wrong," she cries.

Alexis Hewitt, a beachgoer who recorded the incident and posted the video to Twitter on Saturday, wrote that she was "sleeping on the beach" and "woke up to this." The video spread quickly and was shared more than 38,000 times as of Monday morning.

I was sleeping on the beach and I woke up to this.. i can’t believe it.. pic.twitter.com/UJE5Sy7E4G

"When she fell that's basically when it caught my eye because everyone was yelling and I woke up, and I got my camera out right when she went down," Hewitt told Philadelphia ABC station WPVI.

Weinman was approached by the officers Saturday afternoon because she had alcohol on one of the city's beaches and was suspected of being underage, according to NJ.com, which cited a Facebook post by Weinman that has since been removed from public view. In the post, Weinman wrote that she had passed a breathalyzer test and had walked away from the officers, who came after her. She then asked them whether they didn't have "something better to do" than stop suspected underage drinkers, NJ.com reported.

She refused to give the officers her name and began walking away, she wrote. That's when an officer tackled her, NJ.com reported.

Weinman was charged with two counts of aggravated assault on a police officer, aggravated assault by spitting on an officer, disorderly conduct, resisting arrest, obstruction and possessing alcohol as a minor, police said in a statement posted to Facebook on Sunday evening. Weinman made no mention of the criminal charges in her Facebook post, according to NJ.com. 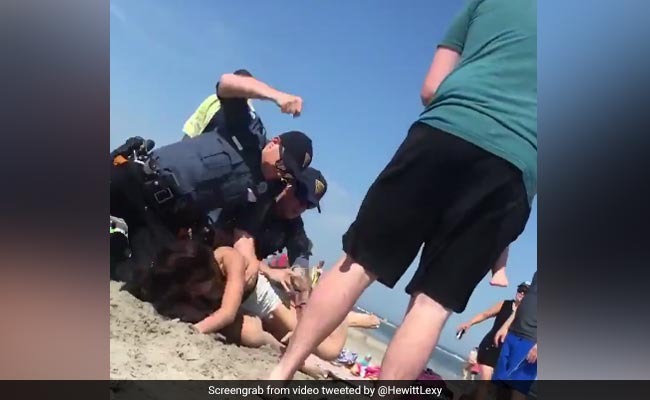 The woman in the video is Philadelphia resident Emily Weinman.

The officers involved in Weinman's arrest have been reassigned to administrative duties pending the outcome of a "full and thorough" investigation, police said. The Cape May County Prosecutor's Office will assist in the investigation.

While Regalbuto found the video to be alarming, police said in the statement that the chief does "not want to rush to any judgement until having the final results of the investigation."

The incident shocked many on social media, including social activist Shaun King, who recently brought attention to a New York lawyer who made xenophobic comments about Spanish-speaking employees at a deli.

"This happened after officer's confronted the young mother over having an open container of beer on the beach," King wrote in a tweet. "That is literally her baby being rescued from the melee as police begin beating the life out of her - punching her repeatedly in the face."

Promoted
Listen to the latest songs, only on JioSaavn.com
The Post could not immediately confirm whether the child King referred to is Weinman's.

(Except for the headline, this story has not been edited by NDTV staff and is published from a syndicated feed.)
Comments
New JersyEmily WeinmanAlex Hewitt