The gruesome clip, released by the Humane Society of the United States, underscores what could be happening in the American wilderness when no one is watching. 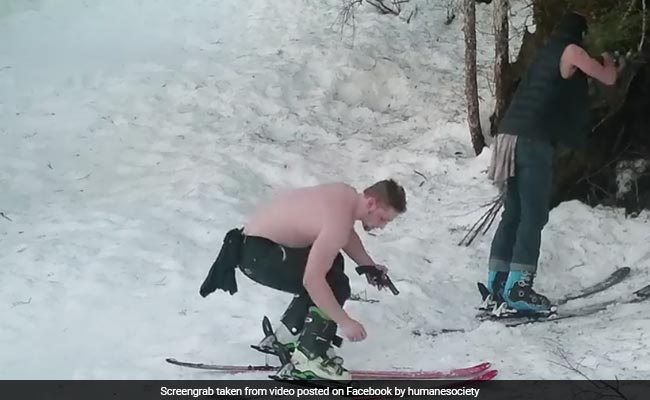 The two did not realise that their every movement was being recorded by a government stop-motion camera.

Nearly a year ago, a shirtless man and his father, also shirtless except for a black vest, stalked through the wilderness on Esther Island in Prince William Sound, Alaska. They were searching for prey.

Armed with a hunting rifle and handgun, the two Wasilla residents crept up to a huge tree stump, where a mother black bear and her two cubs were bedded down for the winter.

What Andrew Renner, 41, and Owen Renner, 18, did not realize on April 14, 2018, however, was that their every movement was being recorded by a government stop-motion camera -- including the grotesque bloodbath that came next.

Owen Renner fired two rifle blasts into the mother, and then, realizing the panicked cubs were also present, Andrew Renner shot and killed them. The film was rolling because the bears were part of a research project by the Alaska Department of Fish and Game and the US Forest Service, a study to determine how a dwindling bear in the region had adapted to an increase in human activity. Killing the cubs or a mother with cubs is illegal on Esther Island by state law.

Had it not been for the camera, the duo's illegal hunting -- and efforts to cover up what they had done -- would not have led to criminal charges last year.

Now, two months after the Renners pleaded guilty to charges related to killing the animals and lying to officials, video from the illegal hunting situation has been released this week.

The gruesome clip, released Wednesday by the Humane Society of the United States, underscores what could be happening in the American wilderness when no one is watching.

"Federal law currently forbids this practice on national preserves in Alaska, but the current administration is looking to remove such prohibitions," the Humane Society said in a release. "If this heinous cruelty occurs while protections are already in place, overturning them would all but encourage these massacres to continue."

The sad irony revealed by the tape is that the Renners seem to know they had a good chance of not being tied to the dead animals.

"They'll never be able to link it to us," Owen Renner said in the video.

According to the video, after dragging the mother bear out of the den, the two men high-fived their bloody hands. Then, Andrew snapped photos of a shirtless Owen posing with the dead bear, waving around her paw.

"We go where we want to kill s---," one of the men said after they had skinned the mother bear.

As The Washington Post reported last January, two days after the killings, the Renners went back to the den on Esther Island. The return visit was also caught on camera. The two men searched the site for shell casings and grabbed the bodies of the two cubs, placing them in plastic bags.

Later, Andrew Renner retrieved a GPS collar from the mother bear and returned it to the state's Department of Fish and Game. As The Post reported earlier this year, Renner falsely claimed he did not know the bear was a sow when he killed her, and that he never saw any cubs.

Authorities, however, had video proof of the opposite.

According to a January news release from the Alaska Department of Law, Alaska Wildlife Troopers recovered the camera from the den on April 23, 2018. Both Andrew and Owen Renner were criminally charged over the incident. The charges included the unlawful killing of the bears, unlawfully possessing the bears and falsifying the sealing certificate. Both pleaded guilty.

Last January, Andrew Renner was sentenced to three months in jail, and ordered to forfeit his rifles, handguns, iPhone, skis and truck used in the killing, and was hit with a $9,000 fine. His hunting license was also revoked for 10 years. Owen Renner was sentenced to community service and required to take a course on hunter safety. His license has been suspended for two years.

At the sentencing last year, Alaska Assistant Attorney General Aaron Peterson said the case was "the most egregious bear cub poaching case his office has ever seen."