According to experts, it's a sobering preview of how climate change, accelerated by human behavior (and exacerbated by political corruption), will not just complicate Venetian's unique and fragile way of life but wash it away entirely. 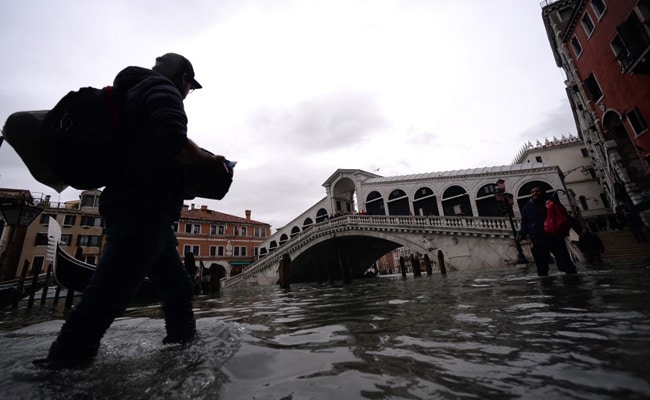 A man walks in flooded street near Rialto bridge in Venice. (AFP)

As historic floods inundated Venice more than half a century ago, one reader in Scotland wrote to the Guardian newspaper in London to express worry about the fate of the "astonishing, but soon-to-vanish" Italian city.

"This is certainly the moment to draw attention not to the cats of Venice but to its buildings, which are slowly but surely disintegrating," the reader wrote. "Once the 'pearl of the Adriatic,' undoubtedly one of the wonders of the world, stucco is now peeling off its palaces (...) Will somebody do something quickly?"

That letter to the editor was penned in the wake of the record-setting 1966 flood that devastated Venice and cities like Florence and Trento. The unusual mix of high tides and river levels plus powerful winds from the southeast pushed floodwaters to six feet, four inches. Two days later, Venice was "left awash in stinking, salty slime deposited by the Adriatic Sea," the Associated Press wrote at the time.

Earlier this week, Venice faced another monumental "acqua alta," or "high water," this time coming just inches shy of the 1966 record. Dispatches from the scene described people tromping around in cheap rain boots as they walk single-file on footbridges elevated over flooded piazzas or wade through knee-high water. An estimated 70 percent of the city was submerged, and Venetians endured another exceptional tide Sunday, the AP reported.

But flooding in Venice is not merely an inexpensive inconvenience. Named a UNESCO World Heritage Site in 1987, Venice is home to priceless works of art by Italian Renaissance masters such as Tintoretto, Giorgione and Titian; historic basilicas and a unique way of lagoon-based metropolitan living for about 50,000 residents. According to experts, it's also a sobering preview of how climate change, accelerated by human behavior (and exacerbated by political corruption), will not just complicate Venetian's unique and fragile way of life but wash it away entirely.

"The disaster that struck Venice is a blow to the heart of our country," Italian Prime Minister Giuseppe Conte said in a statement Wednesday. "It hurts to see the city so damaged, its artistic heritage compromised, its commercial activities on its knees."

Michael Oppenheimer, a professor of geosciences and international affairs at Princeton University who has traveled to Venice extensively, warned that if Venice doesn't complete its already-delayed coastal defense system as sea levels rise, the city will become useless as a place for people to live and to enjoy its cultural splendors.

"The threat is if Venice becomes uninhabitable by normal humans beings. One of the great things about Venice is that real people live there and go about their daily business," Oppenheimer told The Washington Post on Saturday.

Venice's population has already been shrinking for years, increasingly driven out by a growing number of high-tide days and the increased living costs and congestion brought on by tourists. But climate change has a way of making the city less accessible for everyone as the very attractions both tourists and locals enjoy dissolve, Oppenheimer said. 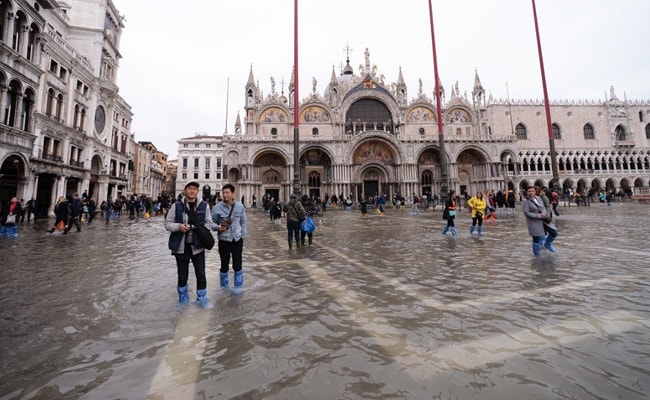 More than half a dozen popular sites were damaged by the latest flood, including the 11th-century St. Mark's Basilica; the Gritti Palace along Venice's grand canal, a private residence turned luxury hotel; and the Venetian-Gothic style Doge's Palace.

Workers assessing the damage that the corrosive, salty floodwater had on the ancient marble floors of St. Mark's Basilica found chipped and missing parts of the marble once the waters receded. There's also concern about the long-term damage to the pillars supporting the structure - and some of the floods damaged marble that was recently replaced after a round of intense flooding in 2018.

Mario Piana, who heads the restoration, previously told The Post that the church is nearly covered with a mosaic of gold and marble from floor to ceiling, with much of the flooring dating to 1094.

"I'm worried for the basilica," Piana said, "The acqua alta does not create immediate, obvious damage. On the outside, you do not immediately see anything. But it is comparable to radiation exposure. In a week, you lose your hair. In a year, you might be dead."

Elsewhere in Venice, volunteers carefully leafed through pages of centuries-old sheet music that had been soaked by floodwater. The Italian Society of Authors and Editors said Venice's book stores and libraries were "gravely damaged," according to the AP.

"Venice is used to being constantly surrounded by water, but this is really something else," Toto Bergamo Rossi, director of Venetian Heritage, told CNN. "The main issue is saltwater. When salt permeates the materials of these buildings - be them marble, tiling, plaster or wood - it crystallizes and ascends vertically once the weather gets drier, from the ground to the first floor and so on. It's almost like a cancer for these structures, all the more so when they are so old. The entire wall system can be affected."

Venice's long-term prospects were grim, according to Oppenheimer, who wrote about rising sea levels in a recent U.N. report on climate change. Venice faces the twin threats of rising sea levels - which affect many coastal cities - and a sinking city. The weight of the city itself is compressing the soil below the archipelago, and the underlying base is losing further volume because of residents draining groundwater for drinking, Oppenheimer explained.

"Imagine you're in a bathtub and you're gradually lowering your body into the tub as the water level is rising," he said. "You get covered pretty fast."

Venice will see that cycle quickening as time goes on. According to Oppenheimer's Intergovernmental Panel on Climate Change report, "extreme sea level events" that recurred once every 100 years will be expected to recur once every six years by 2050. By 2100, that speeds up to once every five months.

After 2050, Venice's prospects will depend on how much humans have done to put a dent in the carbon emissions speeding climate change.

Artwork can be moved; marble floors of churches less so. The historical structures could remain a draw for years to come, but Oppenheimer said that without actual residents, Venice could become a beautiful but empty ancient city.

"What we'd be losing is Venice as a real living place."