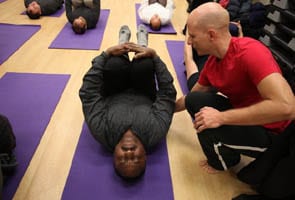 New York: Thomas Lowery clomped down the hallway in his jeans and Timberland boots, 6-feet-2 and 290 pounds and 54 years old, until he reached the classroom. It was an improbably delicate place, a dance studio with blond wood and mirrored walls. Mr. Lowery cut down his strides to pick a path between the nine purple mats arranged on the floor.

"Taxi Yoga," declared the flier in his hand. "No more Road Rage. Become a Road Sage!"

The man depicted on the flier, Andrew Vollo, stood at the front of the studio, clad in black from head to bare feet. "How you doing?" he asked Mr. Lowery and the other students as they assembled. One of them replied, wearily, "Managing, managing."

The flier was one of more than 3,000 that Mr. Vollo had sent or handed out to promote the class. He had visited mosques, Sikh gurdwaras, Hindu temples and had been interviewed on the cable show "India Talks." For this has been his mission for the past seven years, to help New York City's taxi drivers manage the physical and psychic toll of their job by means of yoga.

Earthy and ethereal in equal measure, Mr. Vollo teaches the Taxi Yoga class as an administrator at LaGuardia Community College in Queens. Sometimes, when his Astoria accent gets the best of his enthusiasm, he calls it "yoger." His students include, he said, those "who think yoga is something like yogurt" as well as observant Hindus, Muslims and Buddhists who incorporate what they learn into their existing faith lives.

Mr. Vollo's "dese" and "dem" lexicon is part of his skill set as the de facto guru for some unlikely disciples. The son of a welder, the veteran of years behind a taxi's wheel, Mr. Vollo embodies the spread of yoga across traditional barriers of gender and class.

His course, in turn, shows how what has commonly been a religious practice can ultimately infuse popular culture with a more general sense of Eastern spirituality. While a public college like LaGuardia can hardly offer a class that compels worship of a deity, Taxi Yoga fits into a more contemporary and amorphous realm of mind-body harmony and meditative practice.

"I really think I'm chipping away," Mr. Vollo, 56, said of the blue-collar aversion to yoga as stuff for hipsters, yuppies and space cadets. "If I get nine people in a class, that's fantastic. They'll learn enough exercises to loosen their back and legs. I'll tell them how to eat better, give them breathing exercises. Because if you're driving in pain, you're going to be a nasty person."

Strange as it may sound, yoga's history does sort of lead to Mr. Vollo and his cabbies. In postwar America, amid the counterculture and New Age movements, the lines have often blurred between physiology and theology. "The question is: Are psychology and spirituality on a continuum? And I think they are," said Stefanie Syman, the author of "The Subtle Body," a history of yoga in the United States. "It's difficult to be receptive to deeper levels of self-transformation if you're exhausted and stressed and uncomfortable."

The number of yoga practitioners in America has risen to 16 million today, from 5 million in 1976, according to Ms. Syman's research. But while what she terms the "tougher yoga" styles like Bikram and Ashtanga have attracted an increasing number of men in the last generation, economic class has remained an obstacle.

Mr. Vollo discovered that resistance firsthand over the course of his career. He had begun studying yoga, as well as tai chi, when he was driving a cab as a college student in the 1970s. In the process he moved from the Roman Catholic observance of his youth to considering himself a Taoist, albeit one who still attends Mass with his wife and son.

Intermittently over the decades, he tried to evangelize for yoga among drivers, sometimes persuading three or four to study together for a few sessions, then having years pass without any interest. In 2004, as the director of LaGuardia Community College's educational program for taxi drivers, he gave another push.

He passed out fliers to dispatchers and brokers and at driving schools. People laughed. People ignored him. One office manager kicked him out. But somehow he got his first four students to enroll.

"I don't do the chanting, the Om, the religion," he would assure them. "It's pure exercise."

If so, it was exercise aimed at a demographic niche that needed it. A 2008 study of New York cabdrivers conducted jointly by the National Institute of Occupational Health and the New York Taxi Workers Alliance found that three-quarters of drivers suffered back pain, more than half had neck pain, and substantial numbers had sore heels, knees and feet. With the typical workweek about 60 hours -- 60 sedentary hours -- more than half the drivers are overweight.

Mr. Lowery, Mr. Vollo's student, put it in personal terms: "We're out there 12 hours a day, and we don't have time to do anything besides go to McDonald's or grab a cup of coffee, and then we're back behind the wheel. You're sitting like a pretzel, like a pretzel in a tin can.

"You get neck spasms, back pain, cramped legs. And the strangest part is my eyes, from all the intense staring. They get really red. You can see the veins standing out. It scares me sometimes. I just wonder."

He wondered enough to pay attention to the Taxi Yoga flier he had recently received in the mail and, along with eight other drivers, to attend a recent Monday night class. They supplied a fair cross section of the taxi work force -- immigrants from Colombia, China, Ghana and Pakistan, and a couple of lifelong New Yorkers. Some, like Cesar Calderon, had begun with grander plans; he was trained to be a chemical engineer. Most now shared a particular slouch and dark-rimmed eyes, the evidence of all those 5-to-5 shifts.

So Mr. Vollo played the hack whisperer, coaxing them into stretches and swivels and twists. He guided them onto their backs, then their stomachs; he demonstrated an exercise for eye muscles. He reminded them not to drive with a wallet in the back pocket: "Bad for your spine."

The hour ended. Several drivers paid $20 for the full series of four classes. Mr. Vollo promised breathing exercises next time. The drivers gathered up the change that had slipped out of their pockets -- "Cesar, you're losing all your tips," Mr. Vollo chided -- and tugged socks and shoes back on.

All, that is, except for Mr. Lowery. He had never removed those Timberlands. "I don't know if I feel good," he said with a hint of marvel in his voice. "But I feel something."