US, UK and French forces near Syria 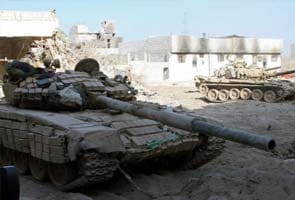 The United States is repositioning naval forces in the Mediterranean as it considers a possible military response to an alleged chemical attack near the Syrian capital, Damascus, that killed hundreds.

Below are details of U.S., French and British forces in the region that could be involved in any attack.

A U.S. military source said on Friday the U.S. Navy was increasing its number of cruise missile-carrying destroyers in the Mediterranean to four from three by delaying the return to the United States of the Arleigh Burke class destroyer USS Mahan.

The aircraft carrier USS Harry S Truman, by far the most powerful warship in the region, left the Mediterranean last weekend, passing through the Suez Canal into the Red Sea.

Defence experts say the carrier could still strike Syria from south of Suez. As well as the strike aircraft carried by the Truman, several of her escort ships are also capable of firing Tomahawk land attack cruise missiles.

Since earlier this year, the United States has also had F-16 jets in Jordan, where they remained after a major military exercise this year at the request of the Jordanian government. It also has a major air base at Incirlik in Turkey that could easily house multiple aircraft as part of a wider military campaign.

Having completed a major refit in the past few weeks, the French nuclear aircraft carrier Charles de Gaulle is operational. Officials say she remains for now in the Mediterranean port of Toulon.

France also has Rafale and Mirage jets based in the United Arab Emirates that could potentially reach Syria.

Without any operational aircraft carriers, Britain would likely be dependent on its cruise missile-carrying Trafalgar and Astute class attack submarines if it wished to join in any U.S.-led campaign.

Defence sources say the Royal Navy has kept at least one of its submarines in the Mediterranean in recent months partly for that reason.

Promoted
Listen to the latest songs, only on JioSaavn.com
Britain does not currently have any combat aircraft in the region, although they could theoretically operate from UK sovereign bases in Cyprus providing the local government agreed.