Christine Blasey Ford's decision followed days of negotiations and came after Trump turned against her and said her accusation could not be true. 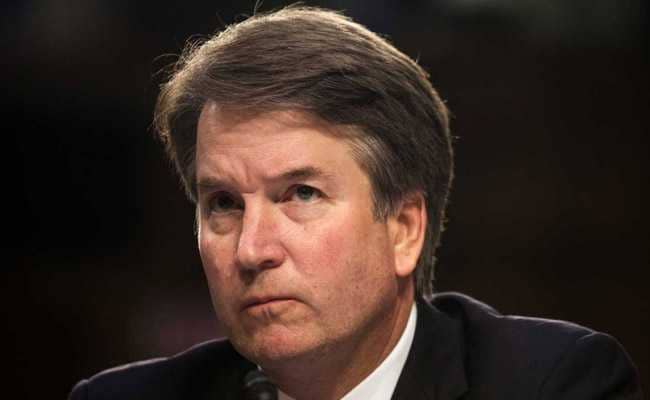 Brett Kavanaugh denies knowledge of any such assault and wants to give his side of the story.

The woman whose sexual assault allegation threatens to bring down President Donald Trump's Supreme Court nominee has agreed to testify in the Senate, her lawyers said Saturday, setting up a dramatic showdown next week.

Christine Blasey Ford's decision followed days of negotiations and came after Trump turned against her and said her accusation could not be true.

Ford "accepts the committee's request to provide her first-hand knowledge of Brett Kavanaugh's sexual misconduct next week," said a message from her lawyers to the Senate Judiciary Committee, US media reported.

Hours later, multiple outlets including Politico and The Daily Beast reported the hearing would take place on Thursday, citing sources familiar with a phone call between the committee and Ford's lawyers.

The tentative deal capped a day of frenetic developments, with time running out for Trump to get his hand-picked conservative judge confirmed -- thereby tilting the Supreme Court firmly to the right for years to come -- before November elections when Republicans risk losing control of Congress.

Earlier, the panel had given the California professor until 2:30 pm (1830 GMT) to decide whether to appear, after she rejected a Friday evening deadline imposed by the committee's Republican leader, Chuck Grassley.

"Although many aspects of the proposal you provided via email, on (Friday) are fundamentally inconsistent with the committee's promise of a fair, impartial investigation into her allegations, and we are disappointed with the leaks and the bullying that have tainted the process, we are hopeful that we can reach agreement on details," read the lawyers' letter cited by The Washington Post.

The White House criticized Ford for allegedly dithering. "But one thing has remained consistent: Brett Kavanaugh remains ready, willing and eager to testify as soon as possible," it added.

Ford alleges that Kavanaugh drunkenly assaulted her at a party when he was 17, she was 15 and they were attending private schools outside Washington in the 1980s.

Kavanaugh denies knowledge of any such assault and wants to give his side of the story to the committee.

Grassley had wanted the hearing to take place on Wednesday, but Ford asked that it be held on Thursday at the earliest and to be able to call as a witness a man she says was present during the assault.

The committee's Republican leadership turned down those demands.

After several days of maintaining a relatively neutral posture, Trump on Friday declared that Ford was lying.

A Call For Respect

According to Trump, the fact that Ford remained silent until now shows the incident probably never happened -- even if this runs counter to what experts say is the typical reaction of sexual assault victims afraid or too embarrassed to report.

"I have no doubt that, if the attack on Dr Ford was as bad as she says," Trump tweeted, "charges would have been immediately filed with local Law Enforcement Authorities by either her or her loving parents."

The senior senator for Trump's Democratic foes, Chuck Schumer, called the president's logic a "highly offensive misunderstanding of surviving trauma," while Democratic Senator Dianne Feinstein said: "We must treat sexual assault survivors with respect, not bully or try to silence them."

Even one of Trump's own Republican senators, Susan Collins -- who sits on the Judiciary Committee -- said she was "appalled by the president's tweet."

"We know that allegations of sexual assault are some of the most under-reported crimes that exist," Collins said.

Trump's outburst saw a new #MeToo era hashtag storm the internet, with people -- mostly women -- sharing why they did not report being assaulted under the Twitter hashtag #WhyIDidntReport.

Ford told the Post she went public with her claims because she felt her "civic responsibility" was "outweighing my anguish and terror about retaliation" after the basic outlines of the story emerged in the media.

Ford's husband, Russell Ford, was quoted by the Post as saying the thought that Kavanaugh could be considered for the Supreme Court after Trump took office troubled his wife so much that she considered moving as far away as New Zealand.

"She was like, 'I can't deal with this,'" Russell Ford said. "'I cannot live in this country if he's in the Supreme Court.'"

Republicans are frustrated over what they say was the deliberate timing of the last-minute revelation of Ford's allegation, accusing Democrats of seeking to prevent the process from finishing before the midterm elections in a few weeks.

For their part, Democrats say Republicans are mounting an unseemly rush to get Kavanaugh into the nine-member Supreme Court while they still control the legislature.