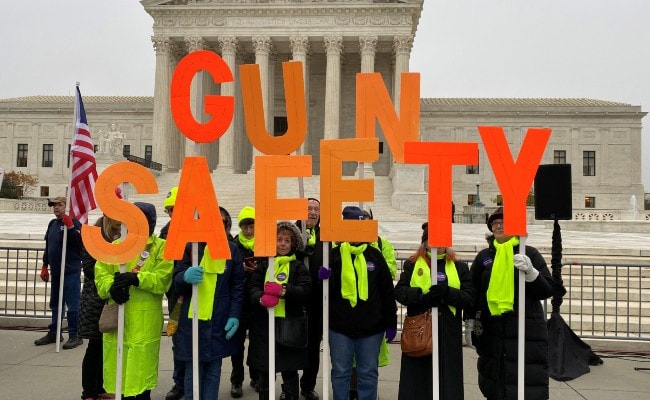 Hundreds of gun control supporters demonstrated outside the courthouse.

The U.S. Supreme Court's consideration of a major gun rights case could end in a misfire, with the justices on Monday debating whether to dismiss a challenge backed by the powerful National Rifle Association to a New York City handgun ordinance.

The justices heard arguments in the first major gun dispute to come before them since 2010, with gun control advocates fearful that the court, with its 5-4 conservative majority, could issue a ruling further expanding firearms rights nationwide.

Much of the arguments focussed on whether the court should even decide the merits of the legal challenge because the city in July got rid of the limits imposed on licensed gun owners on where they could take their firearms that were central to the legal challenge.

"What's left of this case?" liberal Justice Ruth Bader Ginsburg asked. "Petitioners have gotten all the relief they sought."

The city has "thrown in the towel," added fellow liberal Justice Sonia Sotomayor.

Three local handgun owners and the New York state affiliate of the NRA - a national gun rights lobby group closely aligned with President Donald Trump and other Republicans - argued that the regulation violated the U.S. Constitution's Second Amendment right to keep and bear arms. The Trump administration sided with the NRA-backed challengers.

Only three of the five conservative justices asked questions. Two of them - Samuel Alito and Neil Gorsuch - were vocal in advocating for the court to issue a ruling. Conservative Chief Justice John Roberts, who could be a pivotal vote in the case, said little but his questions indicated he potentially could vote in favour of dismissing the case.

The regulation had prevented licensed owners from taking their handguns to other homes or shooting ranges outside the confines of the most-populous U.S. city. Conservative justices focussed on an argument made by the plaintiffs' attorney Paul Clement that the city's amended regulation is still inadequate.

The Supreme Court opted to proceed with the arguments even though the city had argued that the amendment made the matter moot. The court's ruling is due by the end of June.

Hundreds of gun control supporters demonstrated outside the courthouse, calling gun violence a public health crisis. Gun control is a contentious issue in the United States, which has experienced a series of mass shootings.

A ruling expanding firearms owners' rights could jeopardise hundreds of gun control laws passed in recent years by state and local governments, including expanded background checks and confiscations of weapons from individuals who a court has deemed dangerous, according to gun violence prevention advocates. Republican opposition in Congress has been instrumental in thwarting passage of new federal gun control laws.

The dispute centres on New York City's handgun "premises" licenses. Transport rules had been tightened in 2001 after New York police observed gun license holders improperly travelling with loaded firearms or with their firearms far from any authorized range.

The challengers contend that the amended regulation is still deficient because it requires all handgun transport to be "continuous and uninterrupted," potentially putting owners at legal risk if they take a coffee break en route.

The city's attorney Richard Dearing said owners would not face consequences for coffee breaks or other "reasonably necessary" stops. That did not placate Gorsuch, who wondered what would qualify.

Alito wondered what would happen if a gun owner stops to visit his mother for a couple hours.

Roberts asked whether the city residents who challenged the law would face negative consequences for violations of the prior regulation. Dearing said they would not. If Roberts' concerns are resolved by that answer, it could be a sign he would join the liberals in finding the case moot.

The Supreme Court had not taken up a major firearms case since 2010, when it extended to state and local regulations a 2008 ruling that recognised for the first time that the Second Amendment protects a person's right to keep a gun at home for self-defence.

Conservative Justices Brett Kavanaugh and Clarence Thomas asked no questions. Thomas is known as a strong gun rights supporter. Kavanaugh, as a member of a lower court, dissented in a 2011 ruling that upheld an assault-style weapon ban and other gun restrictions in the District of Columbia.

The plaintiffs sued in 2013 after authorities told them they could not participate in a shooting competition in New Jersey or bring their guns to a home elsewhere in the state. The Manhattan-based 2nd U.S. Circuit Court of Appeals ruled last year that the regulation advanced the city's interest in protecting public safety and did not violate the Second Amendment.

(Except for the headline, this story has not been edited by NDTV staff and is published from a syndicated feed.)
Comments
Gun ControlUS Supreme Court