The State Department did not immediately respond to a question on whether the incident was the result of hacking or a glitch. 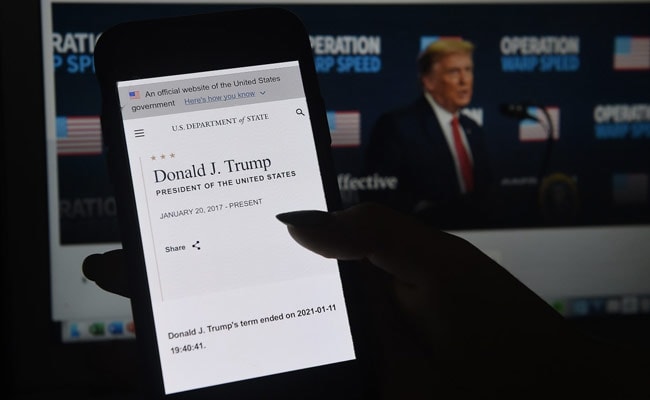 This picture shows a screen grab of the US State Department saying Trump's presidency ends on 2021-01-11.

The US State Department's website prematurely announced that President Donald Trump had left office Monday, sending social media into a tailspin on what happened.

"Donald J. Trump's term ended 2021-01-11 19:49:00," Trump's official biography page said briefly on Monday before being taken down, with internet users instead seeing a message that there was a technical error.

The State Department did not immediately respond to a question on whether the incident was the result of hacking or a glitch.

But it appeared clear that Trump -- who remains president on the White House website -- had not found an uncharacteristically subtle way to quit through a hard-to-find page.

President-elect Joe Biden is due to be sworn in on January 20 at noon (1700 GMT) after defeating Trump in the November 3 election.

Lawmakers are calling on Trump to resign, his cabinet to remove him or for a second impeachment after he encouraged a mob that violently trashed a session of Congress formally certifying Biden's win.